Alright, so I portal into Vashj’ir, then hop my sea-horsey and head to the Abyssal Depths. As soon as I entered the Abandoned Reef I began tapping my rare pet target macro. Must’ve been my lucky day because lo and behold, his portrait popped up — he was there waiting for me!

Now one thing that’s a little bit tricky about this guy is the fact that he phases in and out of view. As he’s patrolling he will occasionally disappear from view, then reappear in another spot somewhere further down his path. This is just an FYI for those of you who may decide to set out after him. You’ll find that one minute you have him targeted, then the next second you don’t. Just wait a few seconds and he’ll pop back out.

It took me several seconds to find him due to this phasing thing that he does, but after cruising around for a bit I happened upon him.

One thing I found amusing is that Ghostcrawler is quite tiny. I was expecting a great big Spirit Beast, but instead he’s like critter size. This makes for an even bigger funny when he starts lumping you up with his Nerfbat. Which by the way, does a decent amount of damage!

Traps won’t work on GC either, so no CC’ing him beforehand. You must eat every harsh serving of his Nerfbat before you can add him to your stable. I was unaware of this, but quickly learned as he charged right through my Freezing Trap and started knee-capping me. 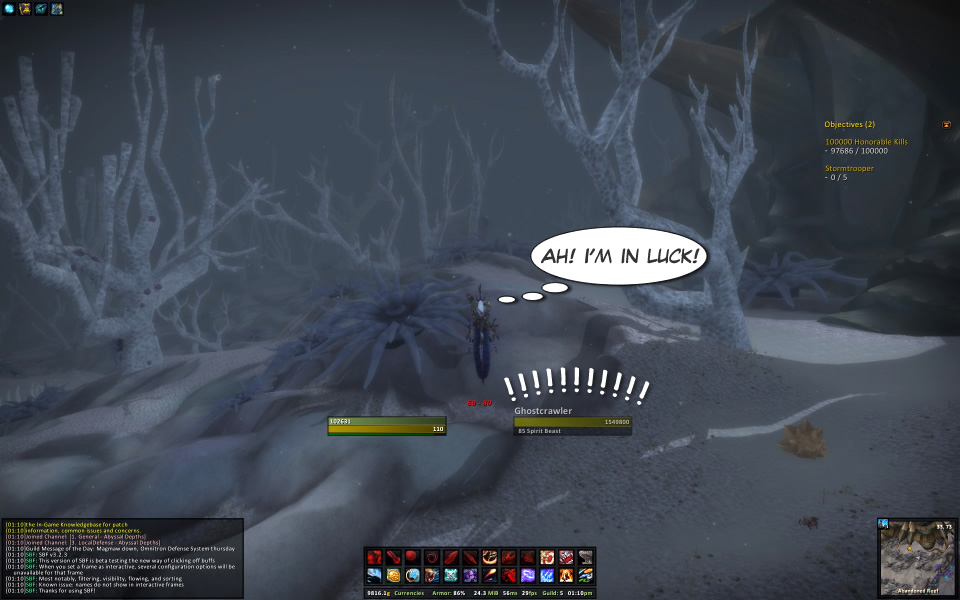 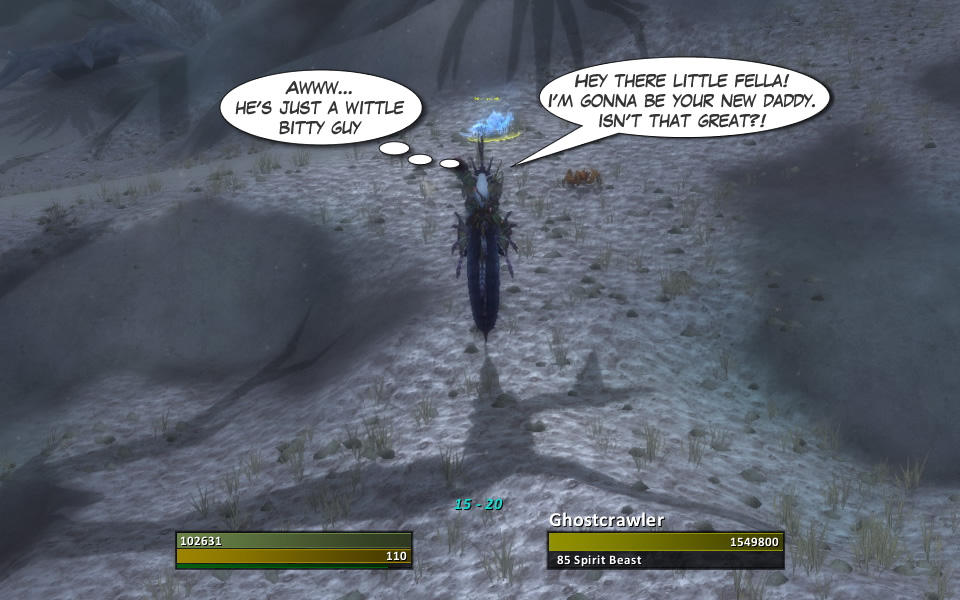 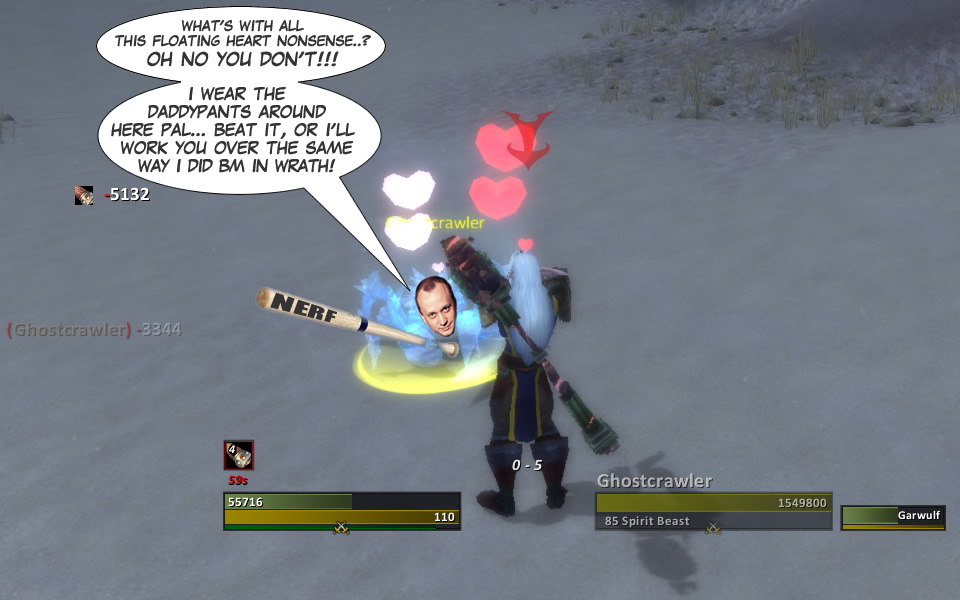 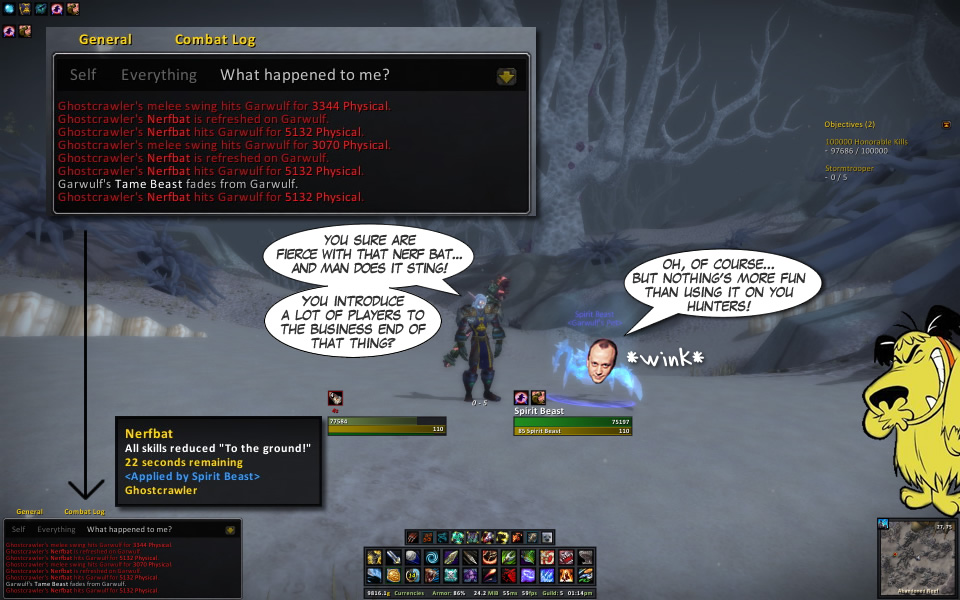 For you hunters out there who wish to add Ghostcrawler to your stable, here’s a current map with taming locations: 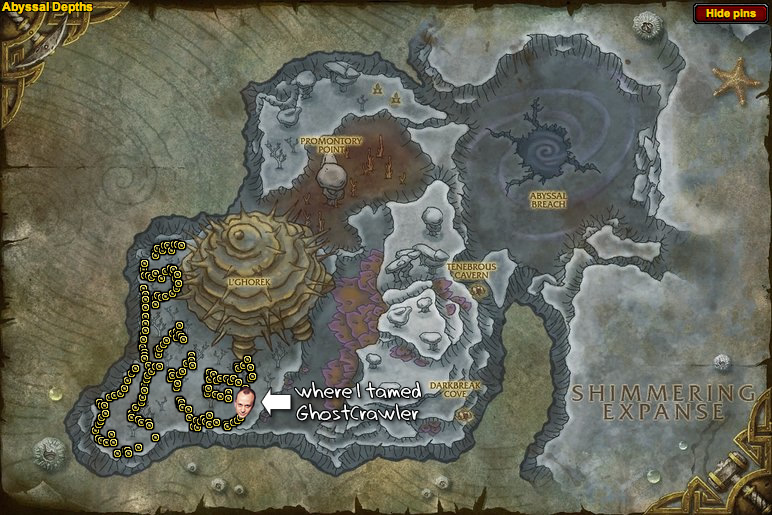 He basically just patrols all throughout the Abandoned Reef. When you go there, just be sure to continually tap your Ghostcrawler target macro or wait for NPCScan to go off. Since there are so many of the new Cataclysm pets running around these days, I mainly just rely on using a macro since NPCScan requires that you continually clear your cache (an unnecessary pain in the ass).

I have one macro that I use whenever I’m making my way through an area that rare spawns are known to inhabit.

You can swap out, remove, and add different mob names as desired.

And just to be sure… know that you must be level 85 to tame him and in your Beast Mastery spec when you do. 😉

Anyhow… Good luck with the GC, and be prepared to feel the sting of his Nerfbat. 😉