When your pet scores a critical hit, all party and raid members have all damage increased by 3% for 10 sec. In addition, increases the damage dealt by Arcane Shot by 9%.

Ferocious Inspiration provides a raid-wide damage buff of up to 3% for 10 seconds when your pet gets a critical strike. It also adds up to a 9% passive damage bonus to the Hunter’s Arcane Shot.

Ferocious Inspiration provides a really nice damage buff for your entire raid. A properly talented Ferocity pet should be able to maintain 100% uptime of this spell, giving your entire raid a delicious 3% damage bonus as long as your pet’s alive. In addition to that, it makes your Arcane Shots hit 9% harder. Being that Arcane Shot is second only to Kill Shot for BM ranged damage abilities, this passive bonus makes the talent just that much better.

Since the bonus stacks with Improved Arcane Shot, FI coupled with IAS can provide for some hard hitting Arcanes. This is especially beneficial for Beast Mastery PvP, due to the fact that Arcane Shot is an instant cast spell which cannot be mitigated by armor.

Regardless of whether it’s paired with Improved Arcane Shot or not, I think Ferocious Inspiration is a solid talent to have for all Beast Mastery builds.

I can really only think of possibly two examples where a Beast Mastery Hunter might want to pass on this talent. One would be for an extreme soloing build where tanking talents are chosen over DPS ones such as this. In that case, Catlike Reflexes would be a better selection at this tier.

Another case against taking it could be made if there is always going to be a Retribution Paladin in your group overwriting the FI buff. Sanctified Retribution cancels out Ferocious Inspiration, therefore rendering it as a talent that merely adds 9% added damage to Arcane Shot. If you plan on always receiving the Pally buff, then it may be worth looking into other talents such as Catlike Reflexes or possibly Improved Hunter’s Mark (from the MM tree).

I don’t like being dependent upon group composition, so I always go with FI when Beast Mastery specced. However, those are examples of when it may not be needed.

Or… if you’re Marksmanship or Survival of course.

Send your pet into a rage causing 50% additional damage for 18 sec. While enraged, the beast does not feel pity or remorse or fear and it cannot be stopped unless killed.

Bestial Wrath turns your pet into an unstoppable killing machine for 18 seconds. While under the effect of this spell, pet damage is increased by 50% and it becomes immune to all crowd control effects.

This is thee defining talent of the Beast Mastery tree. Under no circumstance should this talent ever be skipped. When combined with The Beast Within, this talent combo is arguably the most powerful spell in all of the Hunter trees.

For maximum effect, always combine this talent with the Glyph of Bestial Wrath, which is available at level 40. This glyph reduces the cooldown on this spell by 20 seconds. The cooldown can be further reduced by Longevity, which is a talent available at level 49. When properly talented and glyphed, a Hunter can have over a 28% uptime on Bestial Wrath. 😯

On a side note… this talent is the reason I play a Hunter. I just love it. 😛

If you’re Marksmanship or Survival

Catlike Reflexes increases survivability for both the Hunter and pet by increasing dodge, while also boosting pet DPS via a shortened Kill Command cooldown.

Kill Command is a great talent for extreme soloing. Hunters that plan to tackle lower level dungeons with nothing more than their trusty pet by their side will want this talent.

Or… if you’re Marksmanship or Survival.

Let me begin by saying that I absolutely love some of the Hunter changes introduced in 3.2, especially from a Beast Master’s standpoint. The reworked Animal Handler has been a godsend. While the auto-capping of expertise for pets has indirectly buffed all Hunters, BM really made out when Blizzard decided to replace the now-unnecessary expertise bonus with raw attack power.

The change to Wild Hunt is nice too, even if it is still a bit buggy. I noticed right away that the stats still weren’t carrying over when I specced into Wild Hunt after the patch went live. I’ve been making sure I dismiss and resummon each time I swap out pets just to be on the safe side.

Anyway, these two welcome changes were well deserved, as BM has needed some love here for quite some time. To review, 10% additional attack power for the pet from Animal Handler, plus 10% increased AP inheritance from the Hunter… good stuff. I like this a lot. I currently PvP with a Beast Mastery spec so this is just gravy for me. 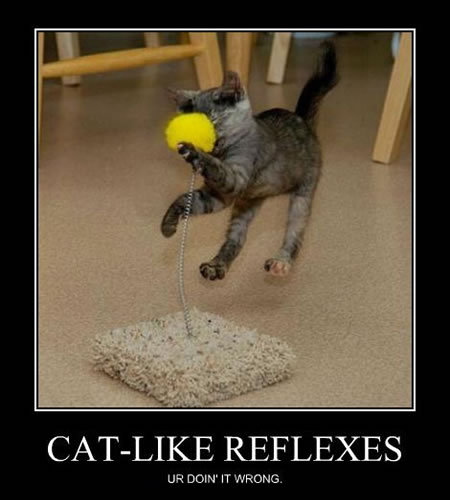 However, the third change affecting Beast Mastery is what I really want to discuss. This is of course, Catlike Reflexes.

From a PvP standpoint this talent looks pretty good. I know, I know… BM PvP is quite the oxymoron. I’ve been doing this for a long time and it’s just how I roll. 😉 I love the hardiness of BM and I relish the last-man-standing style of warfare.

Anyway… the problem is, which talent(s) do you borrow from to pick up Catlike Reflexes. I’ll tell you… none of them.

First of all, this talent is worthless in my opinion without 3 points invested. A properly talented and glyphed BM Hunter will have a 1 minute, 4 second cooldown on Bestial Wrath. The cooldown on KIll Command is 1 min, which is absolutely perfect. Any BM Hunter worth their salt knows to macro Kill Command with Bestial Wrath, and if you don’t, then feel free to visit my macro page to copy and paste. Don’t worry, I’ll keep it on the down low. No one will have to know. 😉

So anyway, in order to make Catlike Reflexes a logical choice, you’d have to invest the full three points to get it down to 30 seconds so as to not be off cycle with the Bestial Wrath cooldown. Again, here in lies the problem… What would be a worthwhile sacrifice for this talent?

For example, this is what my PvP build looks like… END_OF_DOCUMENT_TOKEN_TO_BE_REPLACED