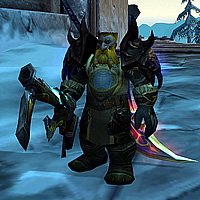 Allow me to first say that I am thrilled to be here, and hope that anything I put on this site helps at least a few people. Now on to the intro!

My adventures in Azeroth started when several friends convinced me to put down Everquest II. The race was an easy pick, as I always seem to select a Dwarf when the option is available. The class on the other hand, wasn’t so simple. Of the friends that were already delving into the game, there was a warrior, a paladin, and two druids. That left me with hunter, rogue, or priest. I knew I didn’t want to heal, and Dungeons and Dragons came to mind when I saw rogue… boring. I chose Hunter and picked the name I have had in many different forums and games, Drackmire.

In my days as a Hunter, I have tinkered with all three talent sets. In the end I am Marksman, and I don’t regret it. Even during the hay-day that was Big Red Kitty I stuck to my guns and was Marksman-Hybrid (0/31/30), which was an agility maximization spec which ended up outdoing full BM almost all the time. I continue to try out different talent combinations, but with the current talent sets it’s hard not to be cookie cutter.

My focus has always been on raiding and instance content. While I won’t get to see every raid encounter in the game, it is still my main focus. I’m not a lore guru, and I don’t particularly care for pvp (though I do participate in WG and a BG from time to time). I tend to focus on those things that will improve my character and other hunters as well. I have very few alts, and the one that managed to make it to 80 as well takes a back seat to my hunter when there are people on wanting to run something.

There are a lot of things I could say about myself, but I’m not really one to toot my own horn. I wouldn’t say I’m well-known either, but I know my stuff and I know my class. My current pet is a wasp. I will be hard pressed to tame another before Cataclysm, unless they make some drastic changes.

Lastly, I am honored that fellow guild-mate and long time hunter friend Garwulf has asked me to share my thoughts and knowledge with the community. I only hope I can live up to the reputation he has already set. 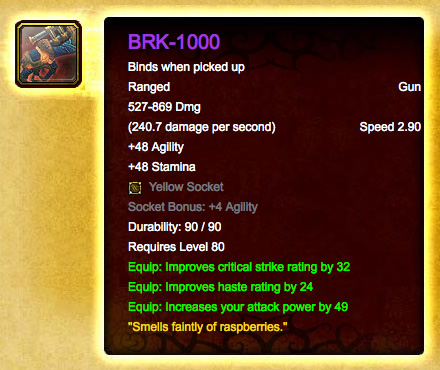 News is swirling around the internets and especially the Hunter community concerning the latest tribute item added to the game, the “BRK-1000”. This gun drops from the Argent Crusade Tribute Chest in the 25 man Trial of the Crusader.

The “smells faintly of raspberries” bit cracks me up. I’m sure most of you are privy to the reference, but for those of you scratching your heads, BRK had a penchant for raspberry lattés. In fact, he’s the sole reason I broke down and tried one a few months ago. I don’t do froofy coffee drinks all that often, but I must say… raspberry lattés are pretty dang yummy.

That gun is pretty extraordinary. Although it looks to be more itemized for MM/SV, it’ll be pretty hot for BM Hunters once Blizz gets the pet stat inheritance worked out. I’m getting excited about this talk of pets getting some of the Hunter’s haste. 😀

I’m not sure if I’ll ever be fortunate enough to acquire this gun, but it really is a thing of beauty. 240.7 DPS + a socket..?! Good grief. This boomstick will certainly blow some holes in things.

Grats on the tribute Daniel. You deserve it.

…or Hunter, rather. This past Monday, BigRedKitty announced on his site that he was stepping away from the game.

BRK is on my short list of a half-dozen or so WoW related sites I like to peek at daily. There are some great WoW blogs out there, but I just simply do not have the time to check all of them on a consistent basis. However, I always have time for BRK. Anyway, after checking to see if Pike had any new Hunter adventures or musings to share, I headed over to BigRedKitty.net as I try to do each day.

Today’s post struck me odd due to the title, but once I saw the amount of comments left I knew this was serious business. Was I surprised..? Not in the least bit. Was I shocked. Yes. It’s hard to imagine there not being any more BigRedKitty Amalgamated Productions.

I can’t help but liken this situation to the scene in Forrest Gump when he decides to go home.

His decision to leave the game has undoubtedly just created a huge void within the WoW blogosphere. I’d only begun reading his blog on a daily basis just last year, but I have to say it’s one of the more engaging ones out there. Even though I don’t always feel his sense of humor, his writing is genuine, entertaining and definitely informative.

One thing I’ve always appreciated about BRK is his willingness to offer up his knowledge and expertise to everyone. Whether it’s someone new to the class and just starting out, or the raid-tested and battle-hardened veteran, BRK treats everyone the same. Correct me if I’m wrong here, but in the months I’ve spent reading his posts and comments he’s always appeared to me to be non-judgmental and polite with others, no matter how insanely stupid or inane their questions or comments were.

That was joke by the way. I was being a little mister right there, as my wife would say.

I’m not applauding him for his helpful and gracious attitude towards others, as I believe that is the way it should be. We’re playing a freaking video game ffs. However, I do enjoy the fact that he created and provided a friendly community for Hunters where all were welcome, not just the uber-leet-massive-pwnage-face-melting types of players (by the way, I don’t speak fluent gamer so that description may not be an accurate translation). Being that I’m at the ripe old age of 37, I recognize a lot of that as a reflection of his maturity, but at any rate it’s always been refreshing to peruse his site for knowledge – as opposed to the WoW Hunter forums. That place is rife with A-holes.

I wish you well in your life outside of WoW. I don’t know you personally, but you have shared with me a great deal of valuable knowledge and insight concerning this class we love to play. For that I thank you.

You’ve also provided a benchmark for WoW blogging excellence which mere mortals such as I can never hope to achieve. Like many others, I am a bit mopey about your departure from the game. However, I am quite happy for Daniel Howell.

I’m not going to sit here and regurgitate the cliché RL > WoW. Every time I read that I want to smack the person silly who wrote it. OF COURSE REAL LIFE IS BETTER THAN WORLD OF WARCRAFT!!! The fact that people feel the need to state something so obvious boggles the mind. That is like saying daily exercise and a healthy diet > smoking crack.

However, that’s not to say that WoW isn’t pretty damn fun, because it is. I too have enjoyed it in the past a little too much for my wife’s taste. It’s easy to let that happen if you’re not paying attention.

The decision you made was the only one you could make, and I’m happy you were able to make it. Some husbands may not have been given that opportunity.

Now… go get reacquainted with your redheaded maelstrom of fury, spend some time with the kid, write that book, get it published, sell hundreds of thousands of copies of it, and get your new Z. Who knows… after all of that maybe you’ll get the go ahead to log on now and again. If that doesn’t work, just do what I did… get her to play too. 😀

At any rate… Here’s to life beyond BigRedKitty!

P.S. If and when you do come back, wait a few weeks at least. A bit of effort went into writing this endearing tribute post. A sudden return could lessen its poignancy. 😉