The new patch goes live on Tuesday, and with it marks the end of Arena Season 4. Points will still be able to earned and items purchased, but by server shutdown on Tuesday morning you’d better have reached your target rating for one of the coveted Arena titles. My MS Warrior 2v2 Partner and I made a push for 1800 tonight in hopes that we could attain Rival and get me my Vengeful Gladiator’s Longbow. Sadly though, after about a zillion matches we ended the night at 1643.

We started out very well, reaching 1760 within our first 30 minutes or so. Then came the arena rollercoaster that Blizz likes to put you on until you’re ready to get off. We were stuck in the 1700-1750 range for a good 2 hours facing Warlock/Priest, Warlock/Rogue, Warlock/Pally, and Warlock/Druid. Any team with a good Warlock presents us with a tough challenge. 4/5 times one of us would be left to 1v1 the remaining opponent only to have the DoTs still ticking away just enough to give their team the winning edge. Fun stuff.

If it weren’t for the fact that it’s 1800 or bust right now, I’d have called it a night long before. I typically like to quit after 2-3 straight losses, that way you never dig too big of a hole. Some nights are just plain bad.  No matter how well you play you’ll start seeing counter teams one after the other with full s3/s4 gear. It can get pretty frustrating.

Well, there’s still tomorrow and Monday night for that final push. I know the bow will be replaced after a few weeks or months in Northrend, but I’d still really like to have it. Not to mention Rival would be a nice accomplishment for a Hunter/Warrior team. We’ve made it as high as 1787 before, but just can never seem to hit that magic number. A little luck is all we need and maybe some good juju from the Arena Gods. Wish us luck. 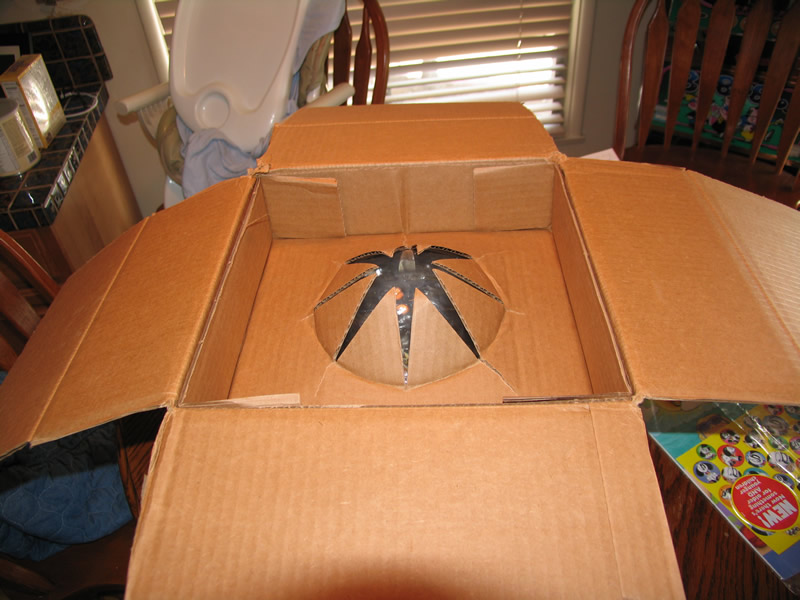 A few months ago I entered to win one of those seemingly cool World of Warcraft statues made by a company called Figure Prints. Apparently the process involved in creating these figures takes quite a bit of time, so the company chooses its customers via a lottery system. They are unable to churn enough of these out each month to meet the demand, so you register at their site and then every month your e-mail address is thrown into a hat. 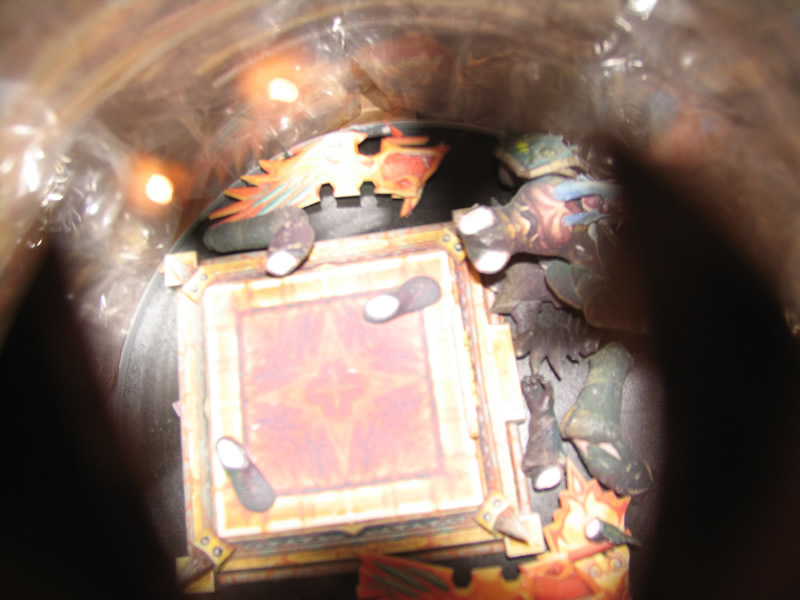 If you are lucky enough to win the lottery for character creation, it costs a hundred bucks and you have a few weeks to decide on which toon you want to bring to life. In my case, I was selected within two months of entering, which I guess is pretty lucky since my wife has been entered for at least eight months and has yet to be chosen. Immediately I jumped at the chance to have my very own personalized WoW action figure.

When I received the e-mail notifying me that I’d won, I was pretty stoked to say the least. Having a personalized World of Warcraft souvenir like that is pretty cool, right..? Anyway, I went ahead and settled on the character to cast which was Garwulf of course. Next, you go through a design wizard where you select the character’s pose and the type of base that it’s mounted on. You also have to make sure that your armory profile reflects the gear you want displayed on your character, then you submit your order. 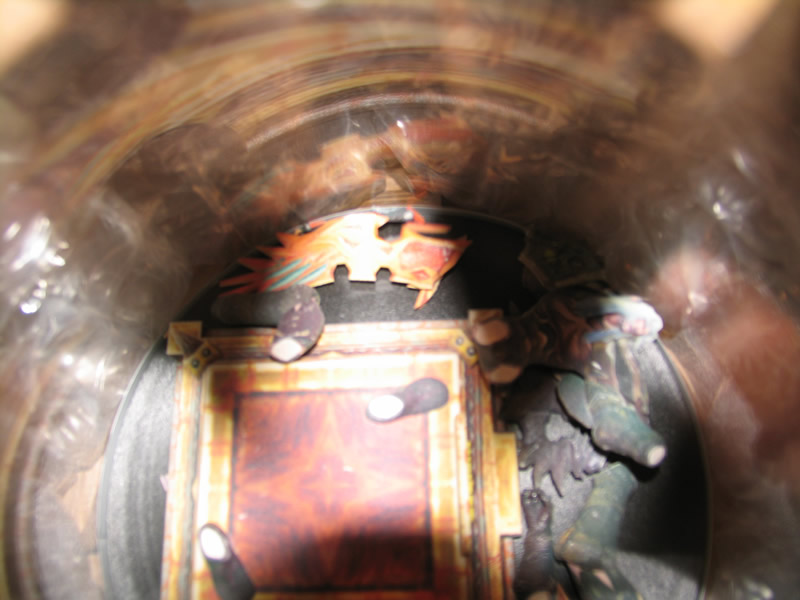 After a few months this piece of $hit statue showed up on my doorstep. It had been so long since I ordered it I had sort of forgotten about it. Once I realized what it was, I gleefully opened the package only to find that Garwulf had been owned by UPS. It’s not really their fault though. The careless packing of these delicate statues is really to blame.

Lucky for me the statue was broken, because it made seeking a refund quite easy. Had it not been broken I probably would have still pursued a refund just due to the lack of quality. These things are pretty weak. The colors are very washed out and the figures lack texture. The examples shown on their website were no strangers to PhotoShop that’s for sure.

Figure Prints were actually really cool about issuing me a refund. They also invited me to have another one created at a later date if I so desired. I doubt that I’ll ever decide to get another one made unless they really improve upon the manufacturing process. I understand that the technology used to create them isn’t cheap and that $100 is a small price to pay, but I’d rather pay twice as much for something that I’d at least want to display in my home or office. I’d recommend staying away from these things. It’s really a neat concept, but it’s a long ways away from being perfected.

… Is now on this site. I created a page devoted to the macros that I use. Check it out.

For nearly two years I played World of Warcraft with absolutely no addons. I was a purist you might say. Once I began raiding however, my guild required me to have a threat meter and boss encounter alerts. Since I then had to install those essential 3rd party addons, I decided to see what else was out there.

To make a long story short, after about a year of trying various addons, I’ve assembled a suite of mods that I believe to demonstrate awesomeness at its finest. My UI is geared primarily towards PvP, but works equally as well for parties and raids. The emphasis is on organization and useful information during combat.

Since I played for the better part of two years without addons, I got pretty used to the default Blizzard UI. This is why I’ve chosen to keep the unit frames and mini map in their usual spots. I tried different configurations, but I prefer having those items at the top of the screen. A lot of people like to have their unit frames at the bottom either near their character or action bars, but I say go with whatever works.

The primary addons that I use to achieve this setup are:

Those are the addons that are responsible for the appearance of my UI. Just like anything else, these addons require a little work in order to tailor them to your needs. In my opinion though, it’s worth it to spend a little bit of time on something that will enhance your enjoyment of the game. I don’t consider myself reliant upon addons, but I’d prefer not to go without after having gotten used to them.

Other addons that I use which aren’t readily visible are:

Other than those mentioned, I use a few FuBar plugins that make life easier. These are things like auto repair, inventory management, fps and latency meter, clock, etc. After Wrath of the Lich King is live and provided my UI isn’t completely broken, I’ll post a detailed and itemized list of my current addons. If people are interested, I may even upload a zip file for others to download and install.

In 4 days we have all of our talents points reset, along with some other nifty changes. I wasn’t able to get on the PTR to see this stuff first-hand, but I’ve heard good things from other players who were on the PTR. My main concern is how I should spec for the final weeks of arena prior to Wrath of the Lich King. I’m really considering going… Survival… *gasp*!

The talents in that tree seem to offer much more for the PvPer. I really like the stamina/AP synergy, and the mana regen is insane. However, it really all depends on how pet survivability is in arena. From what I’ve read it’s not that hot. If Blizzard boosts pet survivability, then I may continue as BM. My arena teams rely on burst, and Beast Mastery fits that bill pretty well. A lot of those skills look good on paper too, but I suppose it really just comes down to trial and error.