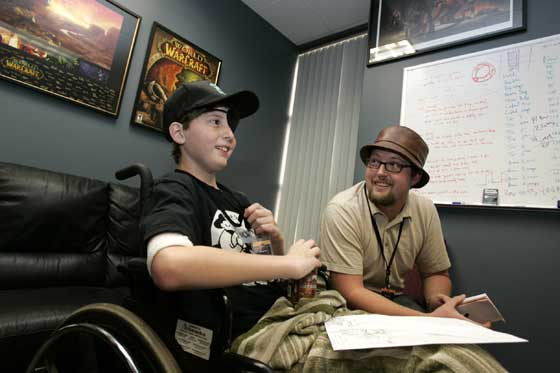 Sad news today for the Hunter community and anyone else who was familiar with the story of this brave young man. After a long battle with cancer, he passed on earlier this week. I first heard about Ezra a little over a year ago. His story is a heartfelt one.

While in the hospital undergoing treatment for a brain tumor, the Make-A-Wish Foundation paid Ezra a visit. Ezra was quick in making his wish — he wanted to take a trip to Blizzard’s headquarters and see if maybe he could work with the developers, “…to see if they could make a character and do some things for us.” When Blizzard got news of Ezra’s wish they quickly arranged for him to come to Irvine and spend the day at Blizzard headquarters.

Ezra got to spend some time with Jeff Kaplan – helping him design some stuff for the game. He even did a little voice work for a character he helped create. Ezra is responsible for creating the quest, “Kyle’s Gone Missing“, and for the Season 2 Hunter weapon, “Merciless Gladiator’s Crossbow of the Phoenix“. He was also the first player ever to obtain the Ashes of Al’ar.

You can read more about Ezra, his brave struggle with cancer, and his incredible day at Blizzard headquarters in this article at The OC Register.

Ezra has a website: http://www.ezrachatterton.org. I tried to access it earlier this morning, but the site was down due to heavy traffic.

My sincerest condolences go out to his father Micah, Ezra’s mother, as well as the rest of his family and friends.

Ezra, may you rest in peace.