After reading the post’s in the forum I went out today looking for some rare pets. I was able to pick up Stompy just at the bottom of the summit.  He also leaves back words tracks like Savage. I think they all do.  I had to drop flare and place hunter’s mark then tame. Of course it took me two days to discover this and it was not able to do so till I read the forum.  Thanks every one for your info!

Tamed my Stompy…./sigh
Gratz, Twisted! I am sooooo jealous of you but I perservere and will someday have my own Stompy!

"At the end of the day, only two things matter:  intelligence, phat lewtz and survivalfulness!"

2 days tracking Glimmer.  This is proving to be very difficult   He drops back words tracks and is slow so try not to over shoot him if you find end of tracks. Also he phases out at least twice near the jade statue. There is two chock points were he crosses every time once at the river and I will get coordinates for you and second as he enters the cloud serpent training area between the wall of the jade temple and the cliffs. I will also include those as well.  Savage Is a easy tame a I love the new look. I think  Patrannache will be the hardest to find at this point I have not found one track of him in three days. Good luck every one. if you want info on pets my favorite site is http://wow-petopia.com/

Well I thought  I would give you all a update on the rare pet search and pass on what I have learned.  Late last night I was able to finaly catch up to Glimmer the red water strider just near the Jade temple at one of the choke points I talked about in my last post.  50.6 – 55.6 is the area I was talking about also learned by fallowing him were he does phase out.  Just after he crosses the river he will phase out in Fox Grove near the area were the Elite Silk worm Chibee hangs out. By the way Chibee is a great tank in case your looking for a good tanking pet. And he will not get much smaller then he is when you tame him so be prepared to have a big guy for a pet. I used him in VEB for tanking during questing I could not pull agro off him at all. Back to Glimmer.  You may need to use one shot to agro him as he will keep walking while taming. I was able to get very lucky and find tracks from the illusive Patrannache last night and after many failed attempts at tracking him due to the tracks being so dang hard to see I found a area according to our friends at Petopia were he crossed a section of the river and walks over a small island. So I do what im good at camp out and just pop flair after flair.  After about 20 min he showed up. Easy tame but you may want to not agro him to tame just let him walk as you do his lullaby ability will interrupt the tame before your done. Of course you can also droop a ice trap and do it the easy way. Hope this help every one.  Keep it real and good luck. 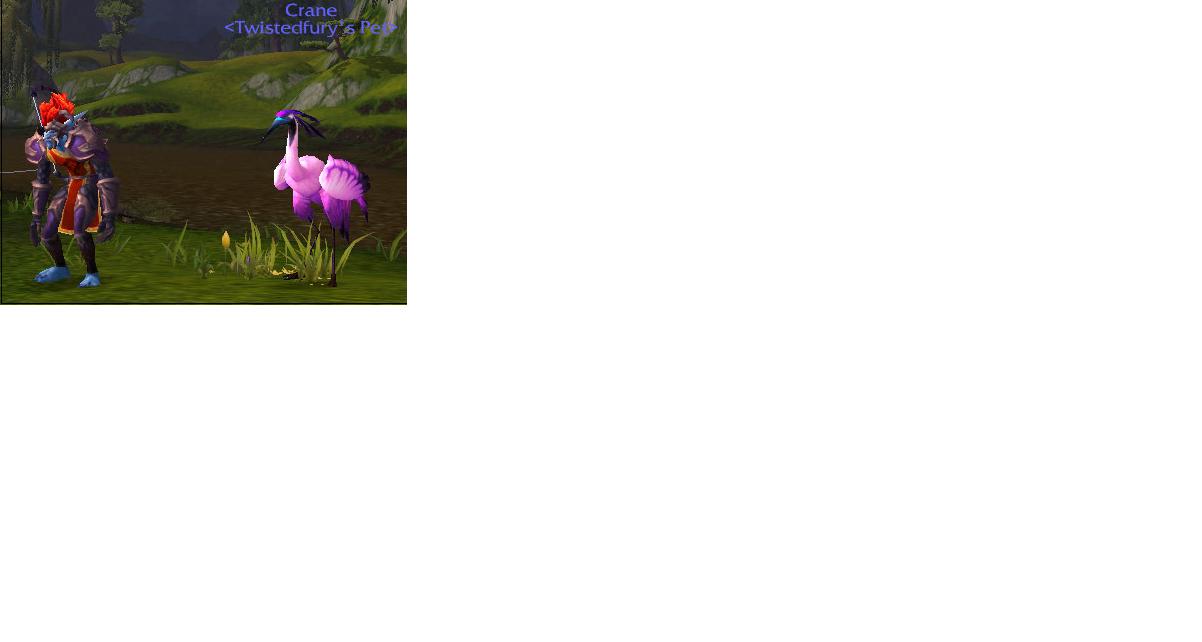 I managed to tame the green Portent.

Here is a update for anyone who has checked out what I have been posting.

That’s an impressive stable you’ve got going — getting filled with new MoP rares. Also, thanks for the info on Glimmer and Patrannache.

Lawman…what’s up with you and Stompy? You make a connection yet?

Hello again after a long break

Here‘s the one lady which I believe is the most unique, rarest and prettiest looking pet of Pandaria besides being the hardest to find. The moment I’m most proud after 3 long nights of insane tracking efforts.

I managed to tame Savage a few days back, agin, still the backwards tracks. An easy tame though, at 90 now even a need for an ice trap tbh, the hardest part is finding him. He moves REAL slow so you can run past him and not notice, be careful with that.

Good luck to the rest of y’all

The first MoP rare I went after was Savage.

In a rush, I did not act smart enough to read the new taming system, and was just interested in its whereabouts.

So not having any idea on the flare trick, I started looping its path, thinking that my falcon eyes would pick him from above.

Started getting frustrated after a long while, so I assessed a few camping points and started camping until early morning.

When I thought I failed, I wanted to read some tips from my fellows and hit the web again…

Then I learned why I failed, and had a big laugh at myself blended with tears of stupidity.

Doing things properly, I was able to find him after a couple of hours of tracking.