Big Ole Thank You To Anj

Big Ole Thank You To Anj

For letting us know the spawn point.  Didn't really care about any of the new pets except Skarr till I saw them, then I wanted them.  I've been camping Anj's spot off and on, but no luck at all.  Yesterday evening I was doing so Archeology for achievments and such, and had one in Mount Hyjal, so I said we'll do a cruise by to see.  Was almost to the moutain behind where she spawns, when NPc scan went off, scared me to death.  Equiped my Nekkid set, landed and had a pet. Dangit, dangit, dangit, but luclily no other hunters appeared, dismissed my pet, hit tame beast, and Maggie was in the fold.

Today a guildie and I were going to do Into the Fire, we hadn't done that set yet.  We get through to the quest givers and turn in the one, and WHOAAAAAAA!  NPC scan went off, and this did more than scare me, turned me into a blubbering fool.  Like I said this was the new pet I really wanted.  Equiped my Nekkid set again, and started jumping, of course go all the way to the last rock and fall.  Since I hadn't done these quests, I didn't know about the druids catching you, and they set me down a few feet from an elemental with no armor and no pet.  I camo'd, and jumped across the lava pool, but missed, and of course damage took camo off, and I aggro another elemental.  I FD'd and my agility training kicked in, and I RLH, I'm staying as close to edge as I can, but aggro another elemental.  This time no armor, no pet, and CD's blown. Luckily someone hit the elemental, never got to thank him/her.  I ran out on the ledge, yup she was close enough, and was about to hit Tame Beast, when I realized, NO ARMOR!  Opened my charcter tab, equpped my armor set, and dangit, I'm at about half health.  Nothing to do, I have to eat, I knew I'd never survive, also used an Elixir of Speed.  Finally I'm at 100% and its still just me and her.  I hit Tame Beast, she starts to cast her barrage, I wait till its half way and hit Silencing Shot (some how I managed to remember to change specs), then hit my macro, the one Gar has on here.

Worked like a charm, till the very end, I'm through my channel and she's just sitting there on that rock.  I'm jumping up and down in my chair, WTH, WTH, even tried to hit Tame Beast again.  You have no target!  A split second later, that seemed like an eternity, she's beside me.  I found my guildie, she shared the quests that I didn't pick up, told you I turned into a blubbering fool, and we finished them with one hitch.  Had to abandon the hatchling quest and go back to quest giver to get it before I could see the hatchlings.

Now the hunt continues, but I hope I have time to settle down before I see any more. 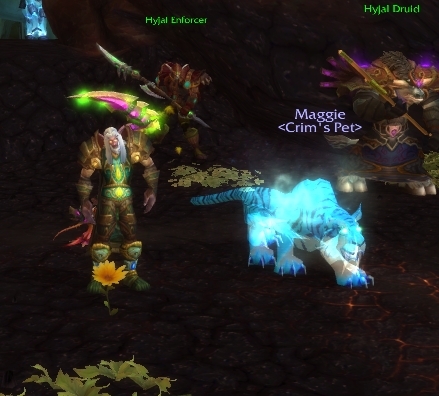 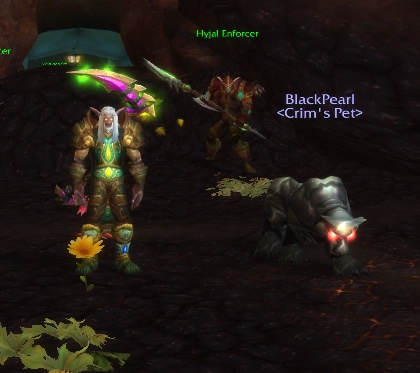 "If you believe in yourself, and have dedication and pride – and never quit, you'll be a winner.  The price of victory is high, but so are the rewards."  Paul William Bryant

So is it turning out that you pretty much HAVE to be MM to tame Skarr?

I don't know if you have to, if you used a corehound for ancient hysteria, you'd have to be BM, but its a really easy tame as MM.

"If you believe in yourself, and have dedication and pride – and never quit, you'll be a winner.  The price of victory is high, but so are the rewards."  Paul William Bryant

Great story, Crim. I love the one you call Black Pearl. She's a beaut! Gratz!

but listen couldnt u just drop a freezing trap and cc it before attempting to tame him/her? Or does that completely fail.

Skarr is immune to traps, sooo.

My Karkin tame though, didn’t go so great… I’ll post that in another thread.