And the S9 vigil begins.

And the S9 vigil begins.

Just recently hit 74 on my main, and I've seen Spirit Beasts get a good rap in PvP, so I thought “Hey, why not?”

After spending until 2AM grinding for XP, partially regretting that I left my dead guild which had Fast Track level 2, I finally reach it. So I fly over to Grizzly Hills, and after nearly getting into a tussle with some Alliance NPCs, found myself in the spawn site for Arcturis…

…only for me to realize there was another green blip on the map. Not an NPC blip either. It was a player.

So I go check, and sure enough there was this lone Orc hunter, also level 74, flying over the slope where Arc spawns. I /wave at him and ask if he's camping the bear, but I figured he was AFK and just logged out for the night.

Today I logged back in, after learning that the best way to catch a Spirit Beast spawn is by checking at the top of the hour (5 minutes on or before the hour is an accepted rule of thumb). 10:40AM on my end, so why not. I log in and——-he wasn't there.

Without checking the minimap, though, I accidentally mouse-overed a bush and found that there was someone hiding in it. A level 76 Undead hunter. I figure he also had Loque on him, given his level, and he's now camping Arc. I /greet him and he /waves at me, showing he wasn't AFK. So I wished him the best logged out to prepare lunch instead.

This is gonna be a looooooong month. =P

"At the end of the day, only two things matter:  intelligence, phat lewtz and survivalfulness!"

Welp, at around 8pm PDT, the bear spawned. He was HUGE. Unfortunately, said Orc hunter had been there camping him on and off, and I had openly told him that he’ was free to get the first tame ahead of me since he was there first.

So I readied my Freezing Trap and told him to start the tame (he froze the bear himself though, so I didn’t use up my trap), and 10 seconds later he was the owner of a brand new ghostly bear. I /cheered him at the end, after which he told me he'’d seen Skoll the previous day. Which is a bummer since he’s 6 levels above me and can’t be tamed. >_<

The funny thing is, about 3 seconds into the tame a Dwarf hunter appeared on the scene and stared helplessly. Thankfully he was kind enough not to grief us or anything. =P

Hunting  SB’s is hard, frustrating and exhilarating all at the same time, you will get him!! I love the feeling of suspense when you first show up on the scene and the adrenaline rush when you hear npc scan go off when your pet is present and ready to be tamed!! Good luck Gryz!

I have 3 lovely spirit beasts, and NPC Scan didn't go off for any of them. Mine own eyes did the trick, every time.

/Grats on your awesome hunterliness…. again!

He'll be yours when he's ready.

One down, eight to go!

I managed to spot Seething Hate in the area while questing, so killed him on the hunch that there can only be a limited number of rares in Northrend at any given time. At least it would give me some indication of when Arcturis will probably spawn.

Sure enough, at the top of the hour, he did: 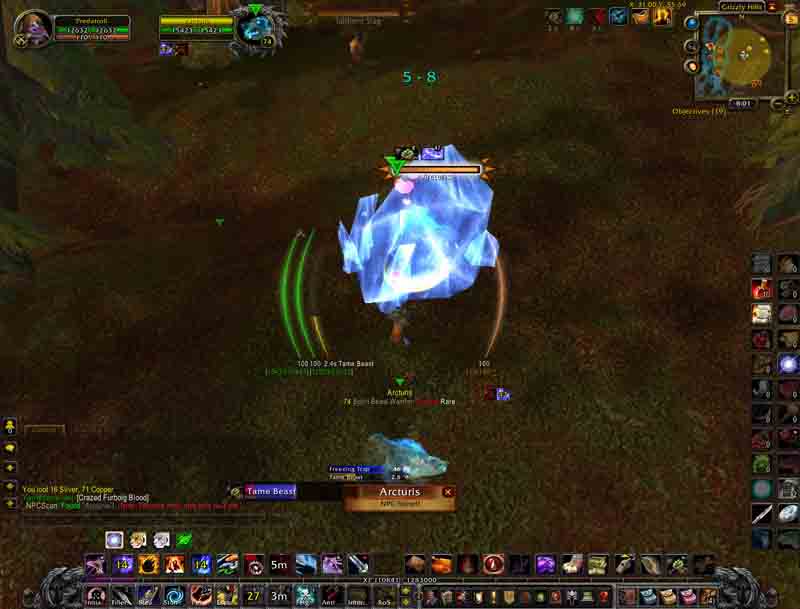 No other hunter in sight due to it being off-peak hours, and I went “Oh thank God”. I froze him, hit Berserking, fumbled to dismiss my turtle (yeah, I was that nervous…lol) and started the tame.

And here we are: 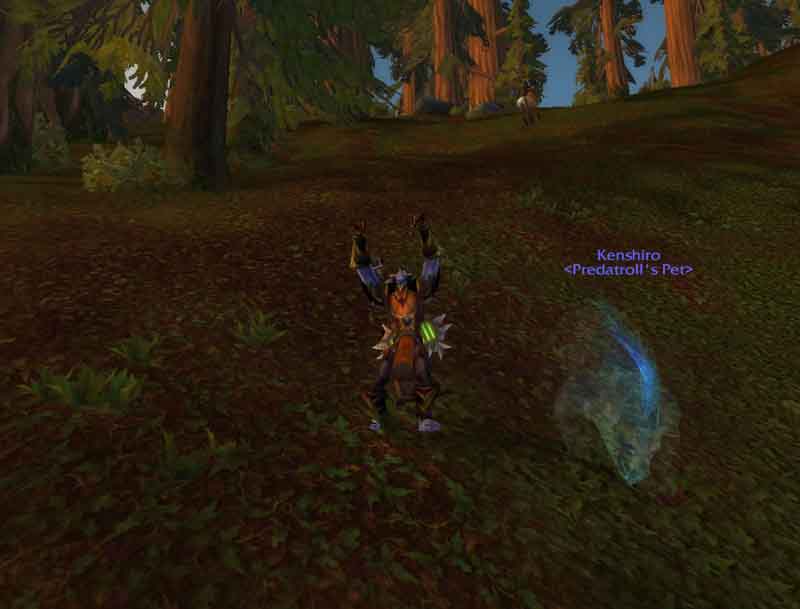 Bonus points if you get the

Thanks for the encouragement folks, looking forward to tame the next 4 if they come my way, Lord willing. One more level and Loque'nahak can be mine.

Keep it up, Gryz, you'll be there in no time!

Congrats-Arc is arguably the hardest given he only spawns the one place. Wait til you get to Sholazar Basin-aah hunterin and pet taming heaven.

Joking aside, I'm now parked in Sholazar questing and RDFing while waiting for the Loque to show himself. I read that he shares one spawn point with another Hunter favorite, the ever-lovin' green dino King Krush. So after my nightly duties I log in, expecting to see something.

Nope, nothing there. No Loque waiting for me. Oh well, time to quest aga—

I walk a few yards when suddenly NPCScan goes off. I try to look around for where my quarry is, and sure enough, he's several hundred yards behind me—and closing fast. Remembering that he cast Fear on people who tried to mess with him, I hit Bestial Wrath, send my turtle in to pick him up, dismiss the fella and begin the tame. Grats on King.  I love my dino; I have the white one with blue eyes from out lands, I think (been so long since I got him) and named him Sinatra.  when he gets all dommie and starts stomping, it's nice to have the mobs off me.

Niika, thanks. I love bringing out the Krush when in AV, he loves eating Priest and Mage faces. ^_^

Today after all the housework I dinged twice, getting to 81. After filling up on more Cata gear than I could shake a polearm at, I dropped by Northrend to check up on the beasties and say goodbye to all that snow for now.

Funny thing is, NPCScan didn’t go off for this guy. since I forgot to clean up my cache. But there he was in his northernmost spawn point, walking around with nobody else in sight. Again, I froze, hit Berserking and started the tame. I was apalled by how slow I did it though. If there were a griefer there I’d have surely lost him, but I didn’t. So I named him Providence. ^_^

Also, look who I see walking around near Loque’s spawn point to the south: lol that is so awesome!  Grats hun! and love the name!  Although for some reason, it reminds me of a woman's name!

Congrats Gryzor on both, but KK, he's a blast isn't he? Hits like a train. I wish he stayed this big

I named mine Orange Soda. God I am so old. 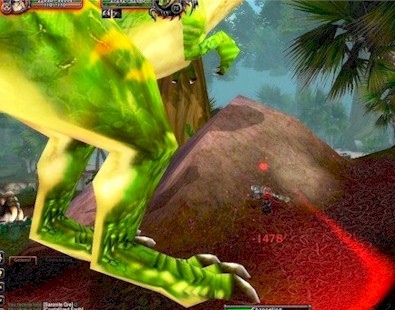 @ Niika: Thanks! Yeah, I did a double take and went “….Wait. He's called the mate of Har'koa, meaning he's a GUY. Providence sounds…womanly.” But it is providence no matter how I cut it. ^_^

@ Aggie: So true, dude. I just relish it for a moment when I summon him after a long while of being stabled. Then he shrinks down to size. Makes me wish I didn't get Glyph of Lesser Proportion.

So today, after getting back home from church, I fire up my troll who I parked in Zul'Drak last night. I fly around for a bit, and… That makes 3! Lord willing I can spot the next few. You're a taming machine! Next up is Skoll before it's off to the Cata Spirits. It took me awhile to get Skoll, course I don't camp but he did seem to be on a long timer. One of the things Skoll does is fade in and out when he spawns-makes it interesting so far as timing the tame. You'll see him then he'll fade away. Least he did near the spawn point near the cave where I got him. His route is pretty short so if he wanders up into the trees, he vanishes for a few seconds causing much panic.

2 in one day! I'm actually excited about finding the remaining ones now. Gar's method of BGing between camping spawn spots has certain helped.

Shortly before logging out of a session, I thought to ride around in the Forgotten Reef off the tip of Vash'jir to see what the place looks like. I've read that Ghostcrawler likes to teleport around in there, and seeing as it was a pretty large place to get lost in, I thought I wasn't going to catch him that day. I actually wasn't expecting to, anyway.

Then, right before I was about to enter a BG, I spot a blue glow in the sand. Moving closer, I actually saw that it WAS him–only he teleported a short distance away. I leave the BG queue and start hunting him down in the general area I spotted him in, and about 30 seconds later he respawned about 40-50 yards away from where I saw him last. I had 4 stacks of Nerfbat and about less than half my HP when I finished. A few hours later, I log back in and farm HPs for my bow. I fly to Storm Peaks after trying to farm Skadi the Ruthless for his blue proto-drake (he didn't drop it, sadly), camp in one of Skoll's spawn points just for fun and enter a BG.

After logging back out, NPCScan went insane and bang, he was walking right in front of me: Now I can say goodbye to snow! (except for Skadi) Congrats Gryzor! Skoll is so cool with that electrostatic thing he has going on. It’s a toss-up between him and Karoma for me. I dig the wolves. And grats on that evil fn crab.

Aaah Skadi-Him and I are on a 1st name basis. Give me a loot drop NPCscan for the damn Drake! That skank Svala Sorrowgrave's speech makes my ears bleed. On the plus side if you're into rep , you can get a lot doing those two Utgarde instances.

Grats Gryz! Skoll is one of my favorites, if not my absolute favorite, such a cool looking skin!!

Bagged me another one! Gar’s method of BG hopping sure is handy. I parked myself on the infamous Dead Tree of Malorne, queued for a BG and when I came back, poof! It became Koko Krunch!

Of course, the funky thing is I had 3k HP left when he finally succumbed. Fershluggin’ Moonfire spam. I swear this bird was a Balance Druid in a former xpac that got Ghostcrawlered into a pet for using damage hacks in PvP.