During recent raids I've noticed I'm not managing to do nearly as much dps as the other two hunters in my guild. One out gears me and is generally much more of a skilled player but the other has roughly the same gear. I'm mostly confused because I'm following exactly the same shot priority yet getting much less damage out. I can't find anything I'm obviously doing wrong but I have noticed on recount that the top hunter is getting a LOT more cobra shots out, this appears to be the only obvious difference. I'm firing cobra shot whenever explosive and black arrow are on cooldown and as much as I can! Just getting frustrated because I can't seem to make the dps up no matter how much I try to fit more in.

So basically please does anyone have any helpful ideas that might save me from getting replaced???! 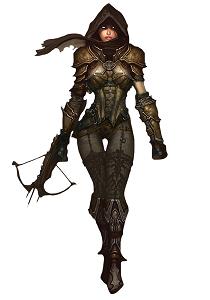 Well.. Your spec looks allright, but; You might wanna put 3 point into One with Nature, so Your AP bonus gets a 30% buff on Aspect of the Hawk.

That should help You out a bit..

How much is a lot more? It could be a couple of different things, like depending on what their professions are could make a different, if they have some different enchants, or getting more crits from skinning or something like that. If they're a troll and using a bow that could give them a little edge too, what are you averaging and how much more are they getting than you?

Are they survival as well? I bet we can get you tuned up some, we may just need some more info to know what is separating you from the other hunters

There is normally a pretty large difference between me and the top hunter, I'll get some numbers at tonight's raid. From looking at recount and logs previously I've seen that our explosive and serpent sting is hitting for around the same (except no. of crits) and we're using it about the same amount of times but the difference in cobra shots is stupidly large, on cho'gall last night I think he was getting roughly 50 more in sometimes:S

I know I don't have as much crit because my gear is a little behind so that will contribute quite a lot of damage, I wasn't too concerned before another hunter joined the guild. His gear is only a little better than mine but he is also managing to out dps me.

Have spent some time today practising my shot rotation and getting lock and load right just to try and get even more familiar with survival. I almost wish there was something obvious I'm doing wrong so I could work on fixing it! Not knowing how to improve is very frustrating

Not knowing how to improve is very frustrating

THAT! =D Although I can't help you since I'm not experienced either, I totally agree with this!

I'm going to guess that you're shot cycle could use a little smoothing out. It seems that you're probably not getting the smooth 3:1 cobra to explosive shot ratio, and that's why you're falling behind in raids.

You should be able to fire three successive cobras, with explosive just coming off cooldown as you finish casting your 3rd cobra. If you're not able to achieve that, then you're either delaying explosive shot or missing out on cobras.

I'm not certain what the sweet spot is right now, but toying with your haste may be the first place to look.

Latency could also be a factor. If that's the case, then there's not a lot you can do other than spam your attack buttons as your shots are about to come off CD.

The handling of Lock and Loads is important as well. Are you making sure not to overwrite your expl shots?

Gar brought this up in his response, I would check into haste ratings. Most SV I've seen/ talked to get three cobra before Explosive comes back up.

Well.. Your spec looks allright, but; You might wanna put 3 point into One with Nature, so Your AP bonus gets a 30% buff on Aspect of the Hawk.

That should help You out a bit..

No offense, but that spec is TERRIBLE. The one she has already is perfect, with the exception of Hunter vs Wild, I'd personally take Entrapment over that, comes in handy for controlling adds, especially during the Magmar fight in Blackwing Descent.

Hunter vs Wild: Yes, the stamina buff is nice, but it doesn't effect your dps in any form.

Sic'em and Careful Aim: Huge increase to your dps, especially if you have 2 points in Wild Hunt on your pet. Careful Aim is again, a great boost to your dps, as raid bosses will have 30 million or more health. Having that 60% crit bonus for the first 20% is great.

One With Nature: Don't let that 30% attack power increase fool you. It winds up to be about 160 attack power, sacrificing other points to get it will just hurt your dps in the end.

Serpent Spread: You really only need 1 point, simply because if you're aoe'ing, you'll be using that ability within 6 seconds again.

Fainne, as for upping your dps, I'd try to reforge that excess hit off of your gear. It might not make a huge difference, but it will add up. Having your Cobra shot cast time to around 1.66 is crucial right now, as it allows you to get off 3 cobra shots in between your explosive shots, minimalizing the time spent waiting for cooldowns, but based on your haste rating, you seem to be near that. When LNL procs, are you waiting for the explosive shot dot to fade before firing it again? What is your average latency at? Also, get rid of those leather bracers. You're losing out on 5% agility by not wearing a mail piece. Also, an armory link to your competition would be very helpful.

I see what U meen.. Might just try and respecc and see the different myself..

Thanks for all the responses guys

And oops, I totally didn't realise I was wearing leather bracers:S Have now replaced temporarily them with some (admittedly quite rubbish) leatherworking mail ones to get the agi bonus until I can find some decent ones. This has given me tons more agility so thank you for pointing it out! Have also reforged the excess hit off, I'm always forgetting to do that when I get new gear lol.

For lock and load I'm going for es-cs-es-as-es at the moment, if anyone can suggest anything better I'll try that but I don't think this overlaps the explosive shots.  Haste seems to be ok, lots of focus regen and I can fit in 3 cobra shots between explosive shots as long as I don't mess up!

Latency could be an issue, internet in england is pretty terrible most of the time

Normally the lag isn't very bad (around 100ms or so during prime time, sometimes a bit more) but if it decides to mess up it can cause me to drop dps quite badly

In terms of some numbers, this is the link to my guild's world of logs page:

Again, thanks for all the help