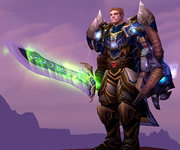 I was running heroic Forge of Souls the other day and had an epiphany. I thought this was a widely-used Marksman hunter trick, but it is absolutely possible that many of you out there spec’d into Silencing Shot do not know about one of its most helpful uses in PvE encounters. I know this because there was another hunter in the group who has much more experience with the class than I do, and was surprised and excited about using Silencing Shot in this way.

There are many pulls in the game of WoW that involve multiple casters. FoS is one such instance, where there are two melee mobs, two casters and a shade that need to be pulled. These pulls are quite tricky for most tanks, as it is hard to pull the casters together for AoE. Pallys can use Avenging Shield to silence at least one of them and force it to come to you (presumably while you run to the other one and Consecrate). DKs can use Death Grip to pull one in. However, what if you are running with a Druid or Warrior tank? What if there are more than two casters, spread over a wide area? What if the pull turns ugly? What if (as often happens) one or more of the casters decides to run away from the tank after the pull?

If you are a Marksman Hunter, Silencing Shot can be a massive help to your tank in this situation!

If you hit the loose caster mob with Silencing Shot, the mob will immediately run to the player who has aggro on that mob. Generally it will be the tank, but be careful and watch Omen. If the mob has low/zero threat, then you might pull it yourself! Be ready with CC, or alternatively, lead the mob to the tank and, once the tank has established aggro and threat (shouldn’t take long), Feign Death, Disengage and get back to the job of pewpew!

This simple macro will target silencing shot on the mob under your mouse pointer without changing your current target: