Update – December 4th: Tomber, the addon author for Raven, has contacted me regarding the couple of issues that I’d had with his addon. He is currently working with me to help sort these things out. I may have this ready sooner than later! 🙂

I am beyond frustrated with all of this UI updating business — namely the buff frames.

Apart from a couple of little annoying kinks, the only major hang-up has been getting a buff addon to configure properly. I’ve wrestled with getting my buffs dialed in for two whole days — no joke. I actually had them configured in a manner that was most pleasing only to have some problems reveal themselves after a few hours of testing. This image is an example of how it was supposed to look. I was smitten with this buff layout. (click the image to enlarge) 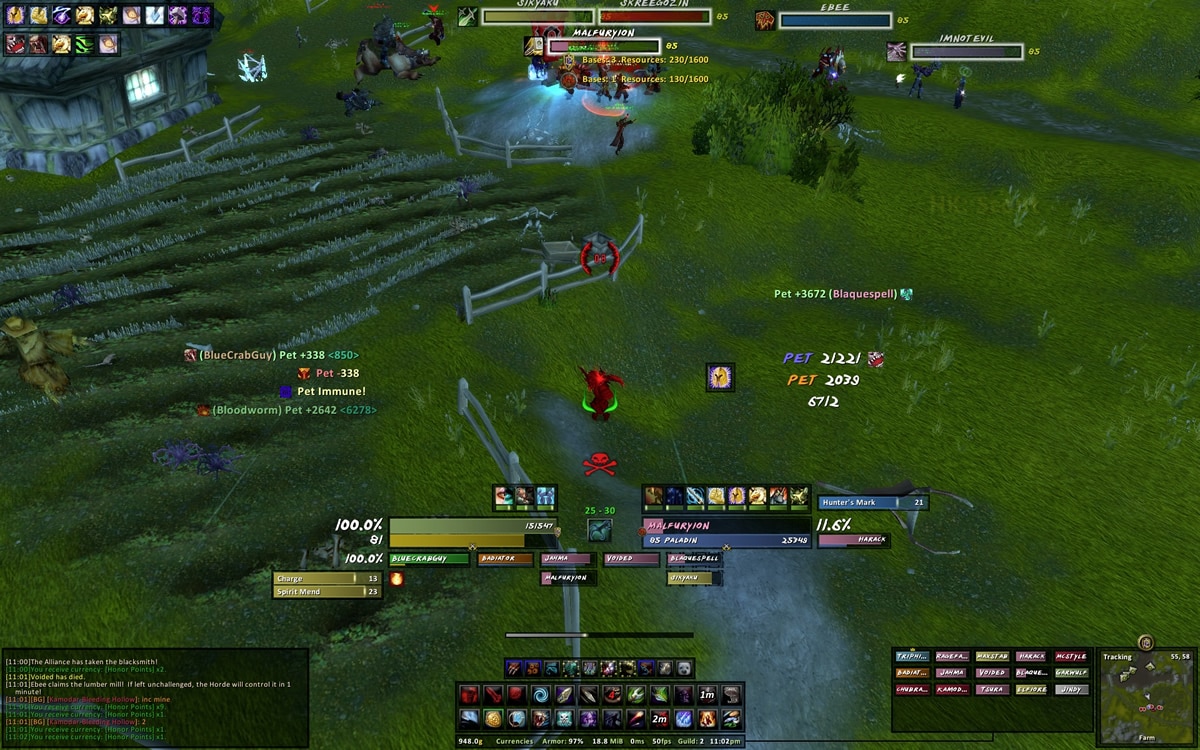 Raven was looking so pretty...

I was really quite happy with this configuration, but then I started to have problems with the background panels. The one big hitch with Raven is that it lacks Masque support, which bums me out big time. I don’t do default buff icons. A primary reason for all of this custom UI fuss is to create something tailored for ‘me’, that is both intuitive and pleasing to look at.

However, with a little tweaking, along with the implementation of the background panels, you can get something that looks really nice. It just takes some patience. Raven has some nice quick-set-up canned configurations, but the custom settings are very convoluted.

Unfortunately, the Raven background panels don’t behave properly when you set a limit for a particular buff frame. The bars and icons will display the maximum allowed buffs, but the frame continues to grow as if it thinks buffs are there. It’s quite annoying. I was riding high last night, admiring the slickness of my new interface…then this issue came along and took the wind completely out of my sails.

I had spent several hours configuring the various buff frames with my specific visual settings and filters…and let me tell you… Raven is an absolute pain in the ass when it comes to fine-tuning the appearance and layout. The config ‘test mode’ must be continually activated in order to get an idea of how it will look when configured, and the test buffs all seem to have a generic skin regardless of your appearance and layout settings.

While a little less ‘polished’ than the Raven backend, I much prefer the setup process that SatrinaBuffFrame uses. I really hope that Raven will eventually adopt something similar. It’s such a hassle to have to continually activate the test buffs — I’d much prefer the frame just display in a static mode, with the maximum amount of buffs visible.

Anyway… after this issue cropped up I started looking online for some clues on how to fix it. It was then that I found out that SatrinaBuffFrame had been taken over by a new developer, and that a new Patch 4.3 version had just been released. I was somewhat irked over this, considering I’d just dumped the addon due to it being inactive for over a year, but on the other hand I was relieved to know that my familiar favorite was updated and active again. I lost all of my previous settings and filters, but being quite familiar with the setup process, I figured I could redo things without too much trouble.

At this point it was pretty late and I was exhausted after hours and hours of fiddling with my UI, so I hit the sack and planned to resume work on it this AM. First thing this morning I downloaded the updated SBF and started to re-configure things. After about 4 hours of configuring and in-game testing…I had things just about perfect. I was pissed that I had spent so much time working with Raven, only to find it was Fubar for my needs, but I was happy to be using SBF again. Plus, this new setup was the best one I’ve created yet – both from a visual and usability standpoint.

Since SBF doesn’t handle cooldown timers I had one little thing left to configure before my updated UI comp was considered ‘done’. I was planning on using NeedToKnow to handle this chore, which I knew would be easy and hassle-free to setup.

So where are things at now…?

Out of the blue, WoW started freezing for me at the login screen, so now I cannot even log in…unless…

…I deactivate SatrinaBuffFrame. This game hates me right now. 🙁

Things were working fine earlier today, but a few hours later I go to log in and configure NeedToKnow and…total lockup. Today I’ve already had to perform two forced shut-downs on my Mac, which totally sucks, because then I have to run the repair utility from the startup disk, which takes about 25mins total.

Long story short… the UI looks fantastic, it plays really well, hunters will f**king love it as will probably any DPS class, but it’s not ready. I won’t upload it until I know it’s working as intended and without issues.

At this point my plan is to just wait it out. I’m hoping that an update to SBF will sort this issue out. I considered going back to Raven again, but I already have far too much time invested in this. I got SBF how I wanted it — now I’m just going to wait and hope that it unf**ks itself. If a few days go by and this problem persists, then I’ll consider going back to the more current Raven addon.

I’ll tell you what really sucks… there are very few choices available for buff addons. If you want an addon that can handle bars and icons, filters, and is highly configurable… these two are pretty much it. Bah!