After looking over the submitted ideas for the Celestial Steed Mount Contest, I determined lawman’s made the most sense. All of your ideas were interesting, but lawman’s I felt was practical and creative.

I think coordinating in-game activities is great, if you have the time, but there’s no way I can swing something like that. I like the scavenger hunt, taming missions, etc… but I didn’t want to hold a contest where there was a “race” so to speak. Maybe I’ll do something like that later on, but for now I like the essay contest.

I intend on hosting more contests such as this, whenever I have the urge or resources to spring for a prize of some sort, so no doubt I’ll be looking for future ideas as well. Some of the suggestions you’ve made I’ve duly noted.

Anyway… here’s the deal… I don’t fancy myself a role-player for the most part, nor does this site ever really dabble in that aspect of the game. Yet, this seems an appropriate theme, given the prize. Those preoccupied with pwning noobs and flexing their GearScore or Recount ePeens will probably have no use for this mount, nor a desire to work for it.

However… those that are interested in this mount would likely be willing to submit a creative article, explaining their version of the lore behind it, along with their own unique story of how they obtained it. Screenshots helping to illustrate the story will be a plus. Since I’ve no idea how many of these stories will be submitted, I’m going to suggest a “soft cap” of 3k words.

The winner of the “Celestial Steed Taming Story” (for lack of a better name) will be required to submit a final screenshot or two with them mounted on their shiny new winged steed. The screenshot(s) should depict the part of the story in which the hunter tames the mount.

So… if you believe that the Celestial Steed is made from the tears of noobs, then this contest is probably not for you. I may have something else for you in the future, but as for now… move along… nothing to see here.

However, if you would derive extreme satisfaction and joy from owning this amazingly cool looking mount, then by all means, show me what you got. I’m anxious to read these submissions. 🙂

The entry deadline for the Celestial Steed Mount Contest will be May 20th @ 12am. I’ll announce the winner later that day.

Good luck to all those who enter!

While I was there… I decided to add a few extra items to my cart.

So, here’s the deal…

Unless I come up with a better idea (not likely)… the person who submits the most exciting and inventive contest idea for winning the Celestial Steed, wins the Lil’ XT.

I’ll give you guys 72 hours to come up with an exciting contest idea for awarding the Celestial Steed. 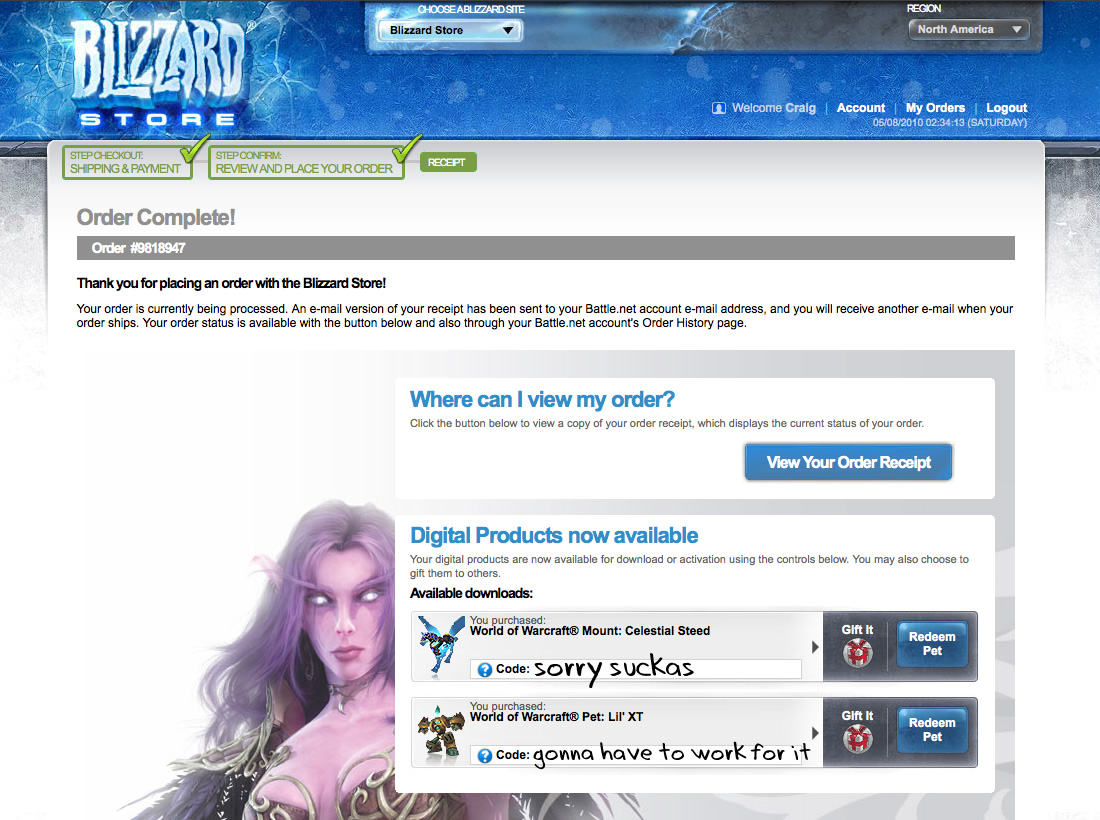 If your ideas suck, then I’ll be forced to come up with a plan. Don’t let that happen… 😉

Basic guidelines for the contest…

I’m itchin’ to e-mail these loot codes, so get on it people. Post your ideas in the comments below, or… if you’re the bashful type, drop me a line via the contact form. Regardless of entry method, the winner’s (character) name(s) will be made public on the site.