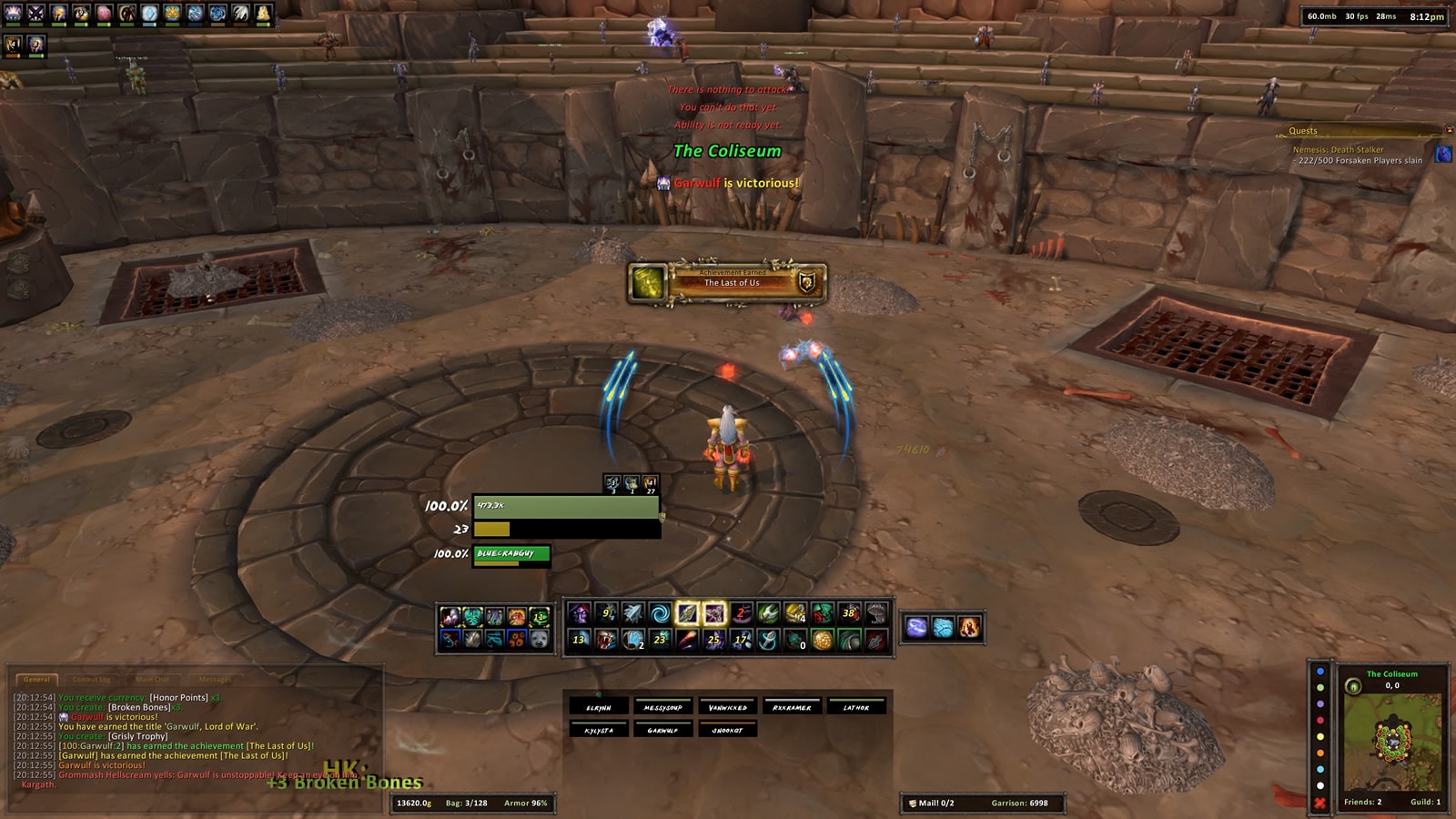 My second time queueing for this instance and I won. My orc out-gears Garwulf 708 to 702, but the best I’ve managed on him is 3rd place. It must be the transmog. Folks were scared, I know it. No one, I mean…NO ONE wants the business end of my crossbow. 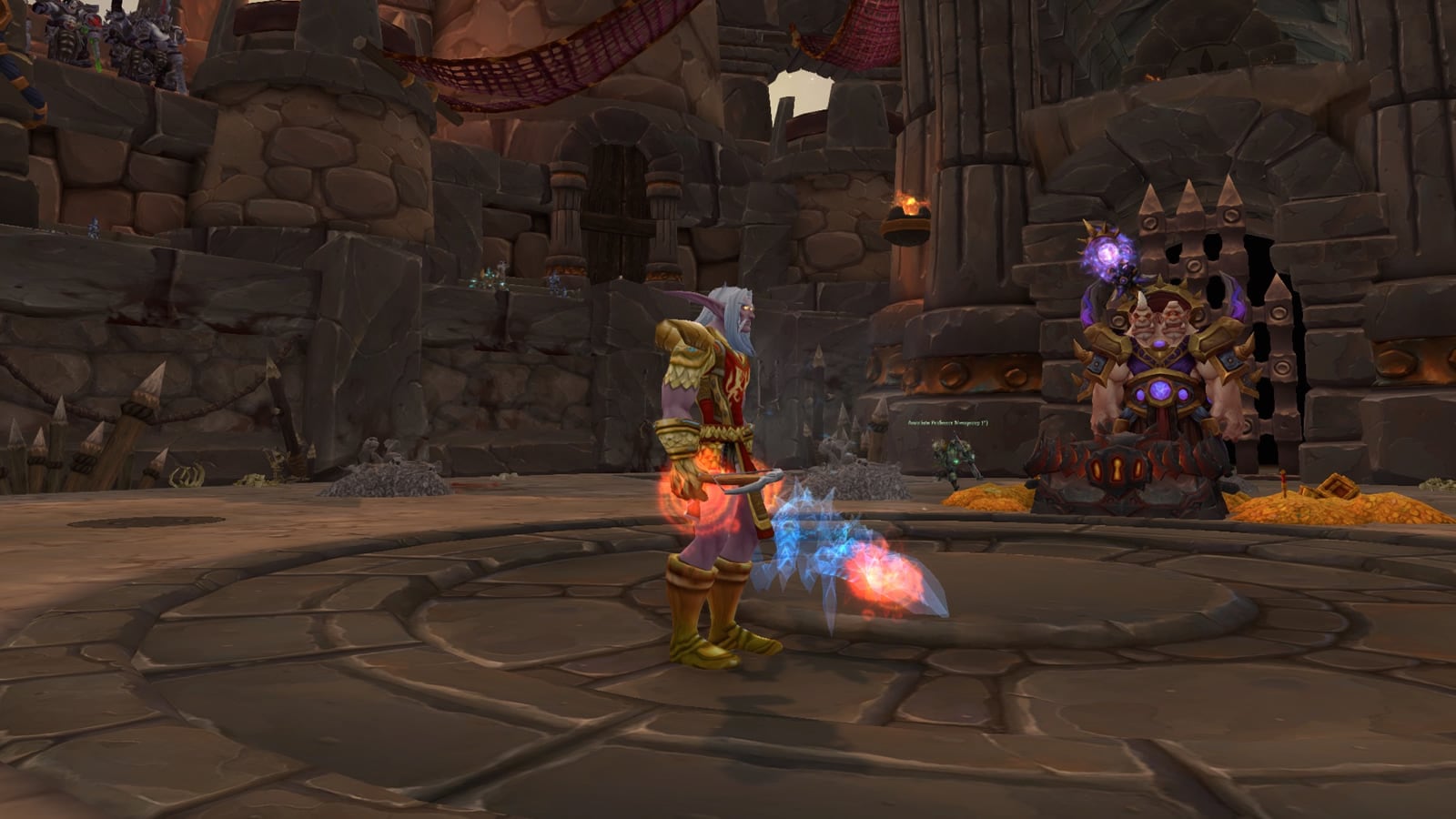 I would also like to thank all of the Death Knights and Ret Paladins that did not join this instance.

This coliseum business is kinda fun. I only started doing it last week, so it’s still pretty new and exciting to me. Winning it was a thrill, considering I only ever see plate wearers come out victorious, but let that be a lesson…

Do NOT underestimate the hunter in the loin cloth. 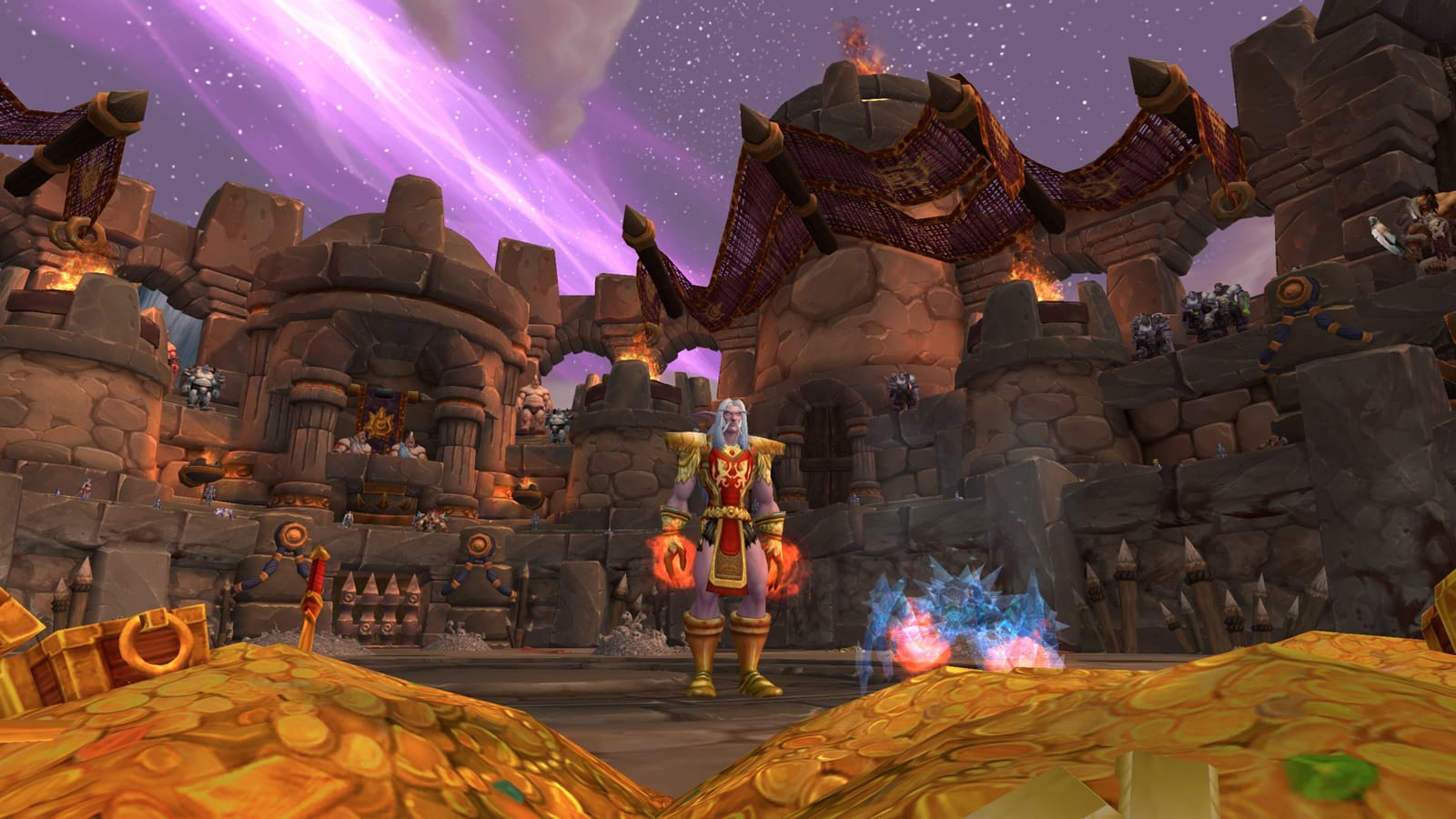 03/21/2016 Update: I’ve competed in this arena probably 20 times since this post, and managed to win it another 4 times. I’ve won it a total of 3 times now on Garwulf, twice on my Paladin, but I have yet to get a win on my orc BM hunter.

I’ve had pretty good success on Garwulf, winning it 3 out of the 7 times I’ve queued for it. The first time I won felt largely due to luck, but when I won it straight away the 3rd time I queued, I figured I must be doing something right. My next win came on my 4th attempt this past week, so at 3 for 7, I feel like I’m doing alright – especially since this event so heavily favors hybrid classes and plate.

My orc BM hunter is running pretty much the exact same spec as Garwulf, but I’ve never gotten past second place on him. Opposing players seem to gun for me, plus I feel like Garwulf has a very slight edge due to a few tricks up his sleeve.

For one, I think Shadowmeld offers a huge advantage. After I run around tagging everyone in the arena, I usually will try to go invisible for 4 or 5 seconds, allowing me to escape some damage and get a few precious ticks of Spirit Bond in. If I’m really out of the fray and unnoticed, I can sometimes get some bandage ticks in as well.

Next, I happen to have a supply of Baby Spice in my bank which I feel works very well for avoiding getting focused at the start. Lastly, I keep a hefty supply of Drums of Fury on hand at all times (since I’m a LW’er), which I pop right around the time Bestial Wrath is about to come off cooldown. The little extra haste buff helps me deal with the remaining 3-4 players that are left at that point. This week I’ll buy some drums off the AH for my orc to see if that little boost will do the trick.

I may post a few more tips on how to tackle this event as a BM hunter, but in the meantime, feel free to ask me any questions and I’ll do my best to provide some answers! 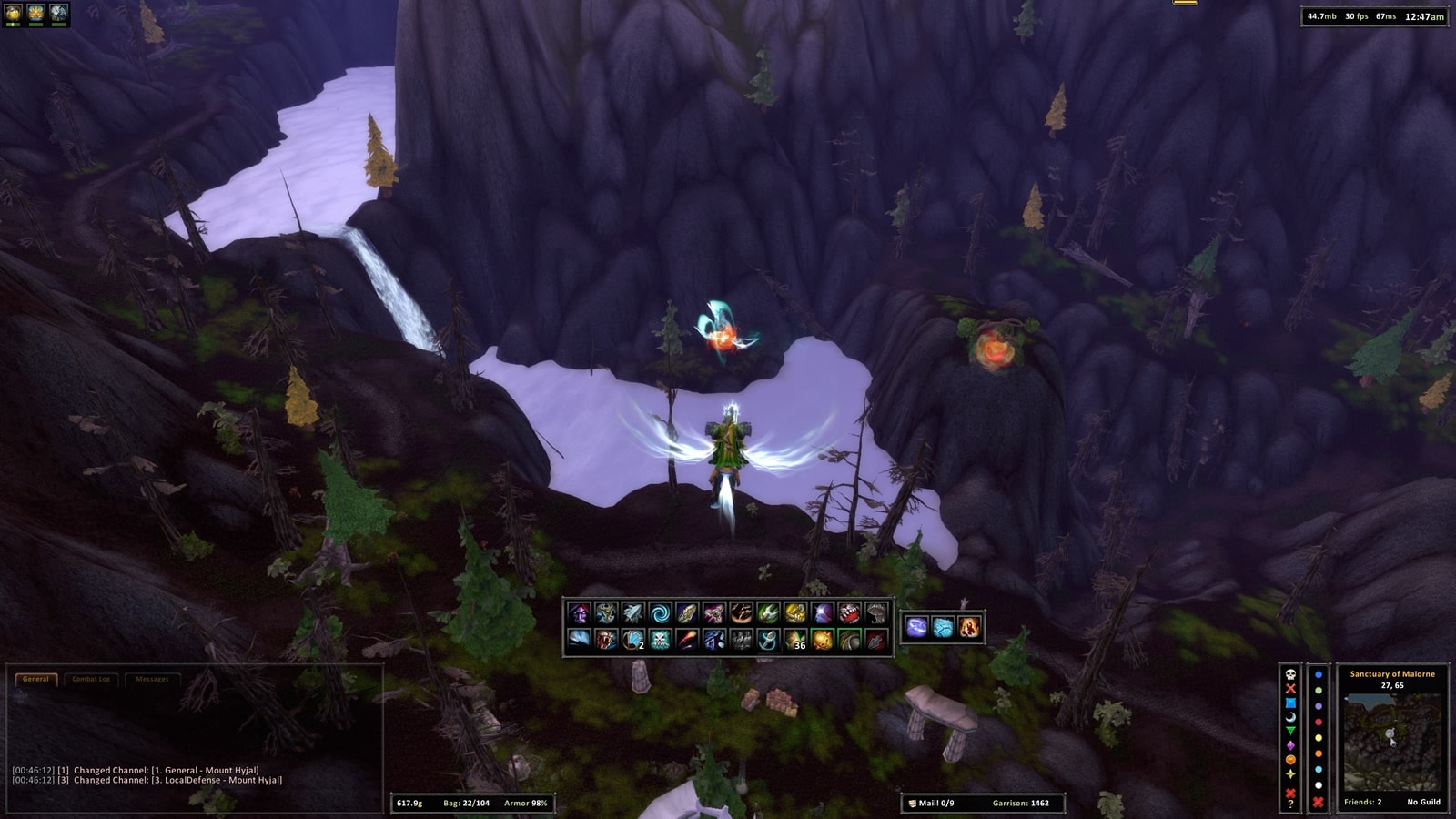 END_OF_DOCUMENT_TOKEN_TO_BE_REPLACED

I know I’m a little late to the party here, but I gotta say…I really enjoyed the Gara taming adventure. I had so much fun with it, I put together a map with some helpful tips so that hunters who still desire to add this coveted Spirit Beast to their stable might have an easier go of it.

I’ll stop back in and update this post with a bit more info and screenshots, but for now, enjoy the infographic! Feels good to update the site again! I can’t believe it’s been a year since I last posted. Bad Garwulf, Bad! 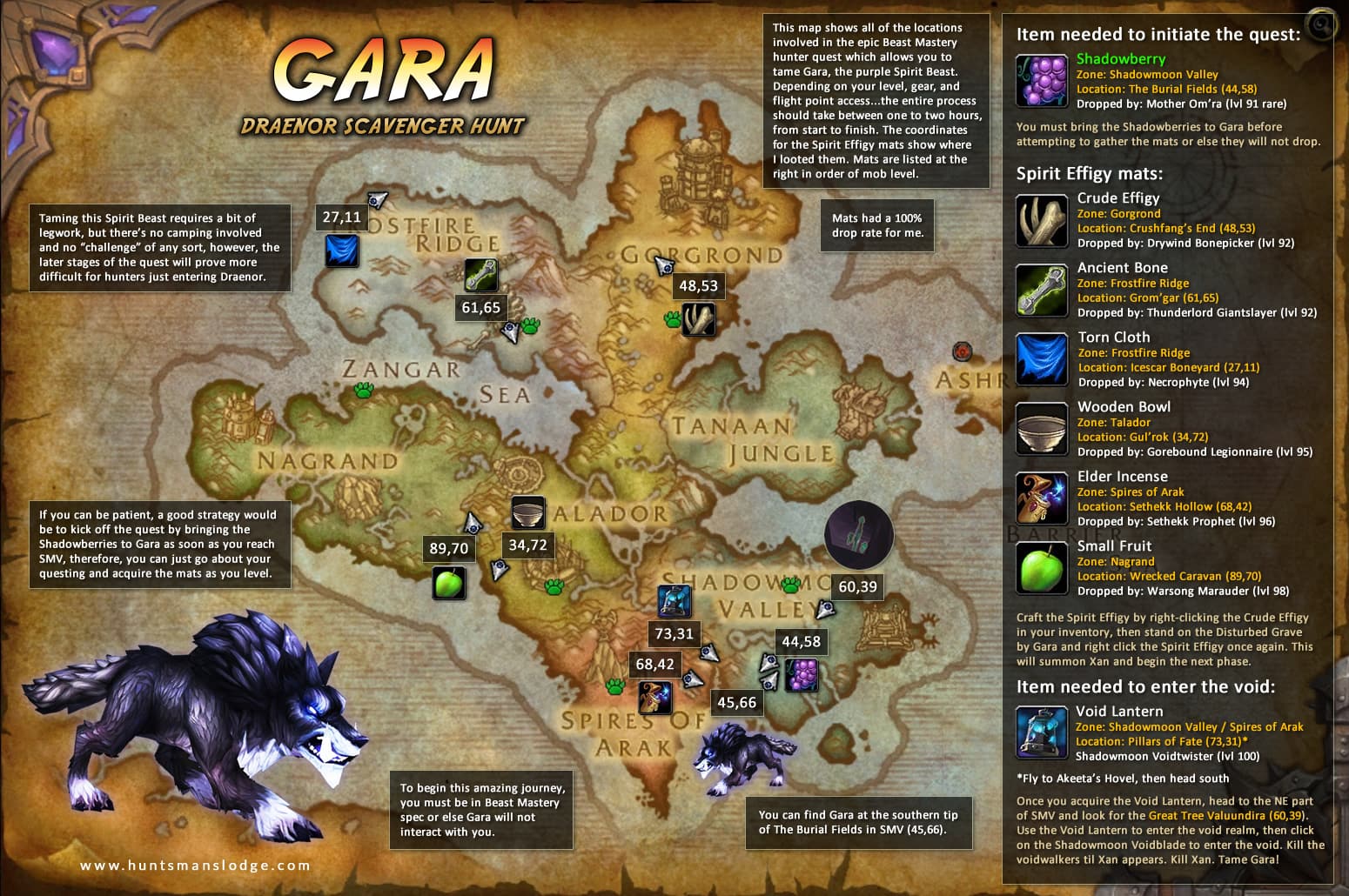 I have been playing WoW (off and on) since its release in November 2004. Hunters have seen a lot of changes to their playstyle, and have had many of their core mechanics changed or completely removed along the way. One of these unique features that has been changed are Hunter stings.

Stings are a type of shot that puts an effect on the target, in order to help the Hunter in combat or hinder the opponent in some way. The one sting that has stuck around through every change, and the one I’ll talk about first is Serpent Sting. Serpent sting puts a damage over time (DOT) effect on the enemy which causes nature damage. It used to be a separate ability that you would cast on the target, and would contribute to the Hunter’s overall DPS. In its current form, it is linked to Arcane Shot and Multi-Shot and only usable by Survival Spec hunters as a secondary effect when you use Arcane or Multi on your target.

Serpent sting used to be vital to the raiding Marksman Hunter’s DPS, and you can read more about it in an article I posted many moons ago here. If you take a second to read that dusty old post, you can see it was very intricate and there were a lot of things you had to take into consideration to maximize it, and be effective with it.

The second sting I will mention is Scorpid Sting. Scorpid sting lowered the targets strength and agility, and was great for PvP mostly, but was effective on certain boss fights where tank survival was more important than putting out as much DPS as you could. It was later changed to reduce the chance to be hit by attacks from the target, which made it slightly better but not by much, and you would still use it mostly in PvP. The only exception to this is that Scorpid Sting was used to fight one of the four demon mobs involved in the Hunter Epic bow Questline to get Rhok’delar, Longbow of the Ancient Keepers.

The third sting we acquired through progression and leveling was Viper Sting. Oh man, this sting was so good against healers and casters in PvP (if you enjoy that sort of thing), especially when a lot of fights came down to who ran out of mana first. In its first iteration, it simply drained the opponents mana. Later it was changed to not only drain mana, but silence the target as well, and regenerate the Hunter’s mana all at once. Talk about your value ability!

Another sting was added about a year after WoW came out in order to buff up survival, and it replaced their useless 31 point talent Lacerate. Wyvern sting caused the target to fall asleep, essentially acting as another silence and cc to the survival arsenal. It now exists as a talent, rather than a spec-specific ability.

The downside to stings was that you could only have one on a target at any time, so you couldn’t stack them. Secondly, in the early days of raiding we weren’t even allowed to use stings on bosses because they took up one of the debuff slots that could be on the boss (originally a boss could only be affected by 8 debuffs at one time). It almost seems like now they are an afterthought for the developers, and I won’t be surprised if they go by the wayside completely. For me though, they were something that was at the core of the Hunter abilities, much like traps. It’s sad that they are so limited now, and not even available to every spec.

Another thing to keep in mind is that stings count as a poison, so anything that can dispel poisons will dispel them.

Nostalgia is starting to set in now. Blizzard, if you are reading this, bring stings back to the core arsenal of Hunter abilities!

What do you all think, should stings return to being more of a prominent aspect of every Hunter’s shot rotation and become a core ability once again, rather than an afterthought?

Join the Army, they said. See the world, they said! I’d rather be sailing!

So my faithful guildies convinced me to learn a second specialization this week. Up until now I have been Marks for 95% of my Wow experience. I tinkered with BM during the BRK era for a while, but then they made Chimera/Serpent Sting the god mode, and I went back to Marksmanship. That was until 2 days ago when we were discussing the Ko’ragh fight in Highmaul. As a guild we don’t have a lot of magic DPS who like to join us in raids, which leads us to a few alternatives. We can PUG in folks which is always a crapshoot. We can level alts, which personally isn’t too fun for me, although my DK is getting there:). Lastly, we can actually look at our other specs and see what benefits they have…

Lo and behold, Survival is pretty much exclusively magic damage. It does all elements to boot. Additionally, the Mastery increases all magic damage you deal. So I did what any good member of the guild does for other members of his guild. I switched, and by switch, I mean learned a second spec.

Up until now I only ever had one spec. Even when they first introduced dual specialization, I didn’t even bother. Marks has always been really appealing to me, and I’ve never been super min/max. I make sure to learn and research gear, rotations, talents, glyphs, etc… but switch just for a bit of extra DPS? Pfft. That’s all well and good until we can’t progress as a guild because we don’t have the necessary tools. So I don’t mind stepping out of my comfort zone in this case.

So I decided to spend the whole raid as survival last night to get used to it, work out my rotations, and get used to pressing a few more hot keys throughout the fight. Survival does have a few extra abilities it uses over Marks. The first fight I didn’t really feel like I was doing a whole lot more since I pulled less DPS than I was used to. We had a clean easy fight though and moved on to fight 2: The Butcher. I was admittedly a bit more comfortable during this fight and there was less movement, but I ended up pulling almost 19K DPS, which was 3K over the first fight.

For the rest of the night there was a significant spike in my overall DPS (21.5K on Ko’ragh), and needless to say, we downed Ko’ragh for the first time (with a little help from some PUGs). He also dropped me some new pants as well.

I’ll likely still use Marks for a lot of my personal PvE content since it has more healing and has higher damage output on trash, but for raiding I may stick to Survival for awhile. Until Marksmanship gets some love, at which time I’m switching back!