Part of my intent in reviving the site is to make it run more efficiently so that I can eliminate the expensive VPS bill each month. In doing this, I’m fiddling around with the forums in hopes that I can lessen the resource load once people start using it again.

I may end up chucking the forums altogether, but I’d like to try and get the community active again. We shall see. In the meantime, forum access will likely be spotty, but it has been that way for quite some time anyway. Upon checking them out today I noticed the forum was throwing back an error, and I’ve no idea how long that’s been going on. If you’ve tried to access the forums this year and have been denied, I do apologize. 🙁

END_OF_DOCUMENT_TOKEN_TO_BE_REPLACED

I’ve avoided Trap Launcher macros throughout Cataclysm mainly due to their inflexible and clunky nature. Most of the macros I’ve tried have suffered from one fatal flaw or another, and in the end, just wind up not being worth it. As such, I’ve gotten used to the act of manually using the ability for all of my traps.

However, recently I started working with a couple of macros that utilize Trap Launcher + Freezing Trap, and both are working famously for me, so I figured I’d share. 😀

First off, know that all Trap Launcher macros require two button presses no matter what. Trap Launcher initiates a Global Cooldown so there’s no way to macro it with a trap – using only one button press.
END_OF_DOCUMENT_TOKEN_TO_BE_REPLACED

After it was pointed out to me that I’d forgotten an @ symbol in one of my mouseover macros, I went through and gave the page a once-over again. I caught a handful of minor oversights like that one, but they’ve been corrected now.

If you happened to grab one or two that weren’t working as intended last week — try again now.

Yesterday I painstakingly reviewed and updated my hunter macros page — adding some cool new ones, revising some old ones, and enhancing the whole macros section ten-fold. Just so you know… I can verify that all of the hunter macros featured on the page are fully functional as of Patch 4.2.2. All of the dead wood has been removed.

I’m happy to announce that HuntsmansLodge is host to what is officially the best damn hunter macros page on the web. I’ve not seen any other hunter macro collection that is as current or complete — anywhere.

For those of you still new to the world of WoW macros, I even created a step-by-step guide on how to implement them into your game. You have no excuse now, so read through the guide and start using them if you aren’t already.

Oh, and lawman… I threw a special little torture tease of an easter egg in the macros page just for you. Let me know if you spot it. 🙂

The following list contains the macros I use which are beneficial for hunter PvP, along with a brief description of each macro so that you know how they work.

For those of you who’ve never created a macro, click here for a brief explanation and macro how-to…

This macro works well provided you have Track Hidden enabled, which should be always. If you sense a hidden enemy is stalking you, or you happen to hear the stealth sound from a nearby rogue or druid, just start spamming this macro. It targets the nearest mob, throws up a Hunter’s Mark and sends your pet on them. This is excellent for preventing Rogues and Druids from using their lethal opening attacks.

This simple macro adds a Wing Clip to your Disengage if your attacker is within melee range. If not, then you simply just Disengage as usual. This is helpful for slowing your enemy as you’re getting away. Also, since Wing Clip does not do damage, you can still safely use this even if you’re Disengaging after freezing your attacker in a trap.

This macro will cast Silencing Shot at your current target, or your mouseover target if no target is selected.

This macro functions the same as the Silencing Shot macro.

This macro functions the same as the Silencing Shot and Wyvern macros.

This macro will Tranq your current target, or your mouseover target if no target is selected. I use Tranquilizing Shot quite a bit in battlegrounds to remove all sorts of things like: Hand of Freedom, Avenging Wrath, Druid HoTs, Blessing of Sacrifice, Pain Suppression, Mark of the Wild, etc… This macro makes it easy to dispel on the fly if needed.

This simple macro prevents your Flare’s target circle from disappearing if you accidentally push the button too many times.

I use this macro to cancel any active buffs that may prevent me from getting my Kill Shot off. This macro will remove Hand of Protection or Deterrence, allowing Kill Shot to fire when ready.

This is essentially the same as a typical PvE Rapid Fire macro, but since PvP is all about burst, I’ll include it here as well. This macro pops Rapid Fire and Call of the Wild (if available), plus it activates an on-use DPS trinket if one is equipped. If you don’t have a burst trinket then just remove the /use 14 line.

This macro combines many DPS enhancing abilities for maximum burst during big red, plus it removes Hand of Protection or Deterrence.

One button press will:

Use this macro for maximum Beast Mastery ass-kicking power.

I wouldn’t call this a PvP macro necessarily, but being able to switch aspects quickly is very important in PvP. This macro toggles between Hawk and Fox when pressed, but you can also use it to activate Aspect of the Wild if you hold down the alt key as well. Also, it always defaults to Hawk, so if you’re not in any apsect then it will put you in Aspect of the Hawk.

I pretty much never use Aspect of the Wild, but it’s in there if you need it. 😉

This is just a basic toggle between Cheetah and Pack. I don’t use these aspects too often in BGs, but it’s nice to combine them both in one simple button press. When pressed, this macro will always activate Cheetah first, so you don’t have to worry about jamming up your teammates on accident. If you want the group speed, e.g., if you’re heading out of the enemy’s unguarded flag room down the tunnel, then just press it again ad you’ll go to Pack.

This is another basic all-around macro, but a good one for PvP nonetheless. It makes sure your pet is in defensive mode, then sends it on its target using Dash. Substitute dash for Dive or Dive if you have a flappy pet.

I use this macro for increased pet control. Pressing this macro commands your pet to return to your side. If your pet’s in real trouble you can press alt as well, and your pet will Dash or Dive for added speed. This is handy for getting your pet out of harm’s way quickly, getting them within Mend Pet range if they’re getting focused, or sending them back to you for Master’s Call, etc.

I added Dismiss Pet to this macro just to save some space on my action bars, but it can be removed if needed.

I don’t like having to use my mouse for anything but movement & targeting, so I use a macro to position my pet. This very simple macro will put your pet in defensive mode and display the Move To taget circle. This is handy for positioning them while you’re busy running, etc.

This macro will cast Master’s Call on you, or on a friendly player if you’re mouse is over them.

This macro will cast Roar of Sacrifice on you, or on a friendly player if you’re mouse is over them.

This macro will cast Intervene on you, or on a friendly player if you’re mouse is over them.

Manually activating Spirit Mend is a good idea in PvP because when on autocast, Spirit Mend only activates at 50% health or below, and only while in combat. Also, your pet will either autocast it on you, or itself, depending upon which of you reaches the 50% threshold first. Take control of Spirit Mend — it’s an amazing PvP ability for Beast Masters.

This another handy macro for any type of play – not just PvP. Pressing the macro will:

If your pet’s corpse is not in your line of sight, just hold down shift to force the Revive Pet.

This macro is one I use once in awhile. It activates Shadowmeld and Spirit Walk (when out of combat) – putting both my pet and I in stealth mode instantly. It’s useful for those times when you need to hide – either to escape certain death or to prepare for a ambush. You could use prowl instead of Spirit Walk if you’re using a cat, but… you probably shouldn’t be using a cat if you’re PvP’ing. Just saying. Visit this page to find a good selection of Hunter PvP pets.

Blizzard is disallowing 3rd party addons from using the right-click ability to cancel buffs. This is a huge pain in the ass for players like me, who like to use SatrinaBuffFrame. This makes it difficult to perform quick actions like passing the flag in Warsong Gulch or Twin Peaks, or canceling Camouflage quickly before grabbing a flag.

To combat this, I created a simple macro. When pressed, it will drop the enemy flag, or cancel Camouflage if it is active. If you’re a dirty Hordie, then replace Horde Flag with Alliance Flag. if you play the fence, then put both lines in there. 😉

Nothing really fancy about this, apart from the fact that I always use gear slots for my trinkets, rather than dragging the trinket to my action bar. By using a gear slot as your trinket macro it allows you to always know which trinkets you have equipped. Also, this makes it easy to swap out trinkets while in BGs if you want to alternate during cooldowns, etc. I always keep my PvP trinket in slot 13, but sometimes I like to switch out trinkets in slot 14.

This macro will use a Healthstone if you have one, or a healing potion if you do not. Substitute in the appropriate healing potion type. I rarely use health potions in BGs, especially now since they’re so costly, but a handy macro nonetheless.

Dirty Hordies can replace Stormpike and Alliance, with Frostwolf and Horde – respectively.

I use a macro like this to place my Seaforium Bombs in either Strand of the Ancients or Isle of Conquest. Because I can’t click off buffs within my UI, and since I don’t like using my mouse for anything besides moving and targeting anyway, this macro works well for me.

You can add daily quest items to the macro as well. For example, this macro will allow you to place Seaforium Bombs, use the Tahret Dynasty Mallet on the Thieving Little Pluckers, and the Magnetized Scrap Collector in Tol Barad. 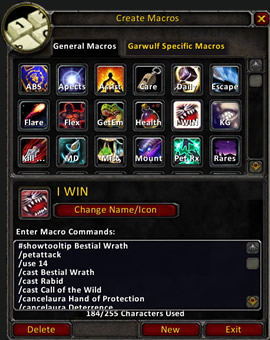 Macros are commands that combine and/or enhance certain abilities or actions. You can use them to pair up complimentary abilities for a synergistic effect, or you can add additional functionality to an action. Macros are great for combining multiple abilities into one action bar slot and just generally streamlining your play.

I find macros invaluable for PvP play, as they can enhance your ability to perform split-second actions, as well as get the most out of your skills and abilities.

For more on macros, please see the hunter macros page.

If you’d like to share any hunter PvP macros that aren’t listed here, please add them in the comments section below.