Well we’re back and we’re randomly tanking things in ICC today. For those who have had the opportunity to do most of the weekly ICC quests, arguably the most annoying one is Lady Deathwhisper’s. Done in a conventional way, you remove an entire player from your team to go OT/babysit Darnavan, to keep him alive without letting him slaughter your raid. Fortunately your raid has a hunter with a properly specced Tenacity pet! Or at least it should. END_OF_DOCUMENT_TOKEN_TO_BE_REPLACED

This guide is going to presume you have a basic understanding of the encounter. We’ll be focusing on the role of a ranged tank exclusively. END_OF_DOCUMENT_TOKEN_TO_BE_REPLACED 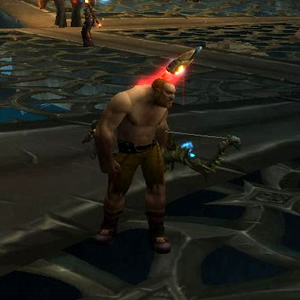 Greetings again all you intrepid hunters. With your permission I’ll be sidestepping my usual exotic hunter tanking topics to discuss the much more mainstream subject of hunter DPS. The focus of today’s journey is a little toy I managed to snag a couple weeks ago, the trinket, Deathbringer’s Will.

For those of you in the know, this drops from Deathbringer Saurfang in Icecrown Citadel. It adds 155 to armor penetration and causes your attacks to have a chance to “awaken the powers of the races of Northrend”. For a hunter this means one of three different effects:

On Elitist Jerks, posters estimate a 50% proc with a 105 second item cooldown. All of my parses so far reveal a total uptime of about 29-34%. This is consistent with a cooldown of of between 90-105 seconds, also pretty certain they’re right about the proc rate. You can pretty much count on this effect triggering after the first couple hits. My higher uptime may be a result of some faster trash pulls and/or ending the fight with a proc active, I would expect an average of 30% uptime to be expected. That 30% average translates to an increase of 360 attack power, or 180 agility or crit rating over the course of the fight. Certainly an impressive increase, also nice to count on an initial dps burst at the start of a fight for a solid 30 seconds.

The individual procs can bring my stats to very impressive levels for short periods of time. So far I’ve seen my Attack Power reach numbers over 13K, Agility approaching 4k, and a critical strike chance of over 85%.

Beyond this yummy dps increase, you get to be transformed into the form you’re channeling. As far as I can tell Iron Dwarf and Taunka forms have just the one form each, but the Vrykul buff can either make you a long red haired Vrykul or a bald shirtless one. Pretty fun, even if the Taunka looks like a Tauren that walked face first into a brick wall!

One warning however. There is currently a glitch (or at least I hope it’s a glitch) that will prevent you from using the rocket pack in the Gunship Battle event while this effect is on you. If you’re part of the boarding party in this event it’s probably a good idea to macro the rocket pack with a /cancelaura command for all three of the above effects.

All in all, I’m very happy with the trinket’s performance, an excellent choice for dps and fun too!

Note from Gar: e-hugs and high fives to all those who can guess the song referenced in the lightbox caption of the pic at the top of this article. Damn I’m old school. 😉

Hello again all you happy hunters!

As I began gathering interest with this endeavor in my guild, we’ve formed a regular group of hunters and one gutsy healer. “Team Deadeye”, as we lovingly call ourselves, has made a few Heroic 5-man runs so far. Today we’ll be following our journey into the Nexus.

It began simply enough, MD pulls of single targets and groups of three, until we get to our first boss, Commander Kolurg.

Simple enough encounter, “Ok team, let’s MD pull with multishot and burn down the cleri…. WTF? No! Don’t pull yet!” Yup, we had a hunter accidentally fire off a stray arrow we think largely due to some keyspamming and lag. Ready or not here they come! At this point, we frantically start trying to control the situation, I Multi Shot the group, as 2 of the other hunters MD & Multi Shot to me. I then lay down an Explosive Trap and start whackin’.

Unfortunately in our haste, it ends up we’re all on different targets >.< Kolurg is loose, and busy slaughtering our accidental puller. I Distracting Shotted him and pulled him back, but the damage was done. She had DCed, and we suspect continued targeting him by mistake during that time. Anyway, situation back under control, we made short work of the clerics and then Kolurg. We res’d our fallen comrade and continued our quest.

A few short trash pulls later we prepare to battle Grand Magus Telestra. We decide that since she’s a caster, she’ll stay put when she splits and be easy enough to control without MD during that stage. So we MD single target pull her and begin burning her down. She splits, and much to our healer’s annoyance, her doppelgangers start attacking different hunters and make healing a bit of a challenge for about 20 seconds while we knock them down. Still, with the encounter fairly easy since she doesn’t hit terribly hard, she falls to us in short order. Next time however, we’ll save an MD or two, to Multi Shot her copies onto me to simplify things for our poor Druid.

Now the fun trash pulls! As we make our way onward the larger trash groups require the need for MD Volleys on the initial pull, as well as us having to burn down the portals. In retrospect, I probably should have marked targets, since once again everyone picked a different one. But despite the bit of chaos, we sped through them unscathed. Anomalus was a simple tank n spank, MD single target pull, burn down portals, dead. Onward Ho!

A few simple pulls later we get to Ormorok, and again a simple MD single pull, burn-burn-burn, dead. To Keristrasza!

We get to the Lady’s room, kill her little blue dragon sentry, and set up for the pull. I lay down my trap, the other hunters MD me, release her and slap her silly.

All in all, a pretty clean run. A few lessons learned to clean things up for future instances. 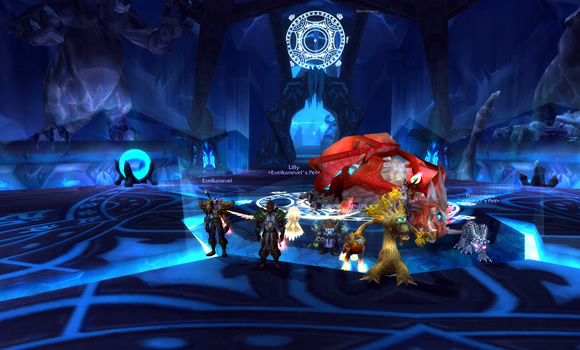 We all know hunters are excellent as a DPS class and possess useful CC abilities, however recently I’ve had the itch to try my hand at a much less conventional hunter role… tanking.

I have tried countless experiments with this concept, and the following is the result of my experiences. No doubt, most of you have begun reading this post and made an incorrect assumption. No, my pet is not going to be the focus of this topic.

Don’t get me wrong, this was one of the first places I went to try and make this work. However, after several talent and gear builds based around making my pet the best tank it could be, I came to a most disappointing conclusion. While I most definitely can talent so that my pet has excellent armor, hp and crit immunity… even with all the avoidance talents available for my pets, they come up ridiculously short of what a tank needs to have for long-term survivability.

Fully buffed and tenacity defense talented, all my parses reveal that my pet only dodges between 5% and 10% of the time. Basically this means, unlike the occasional spike damage a player tank may take, the pet tank is going to be a constant mana drain on any healer. Which pretty much removes its usefulness right there. END_OF_DOCUMENT_TOKEN_TO_BE_REPLACED