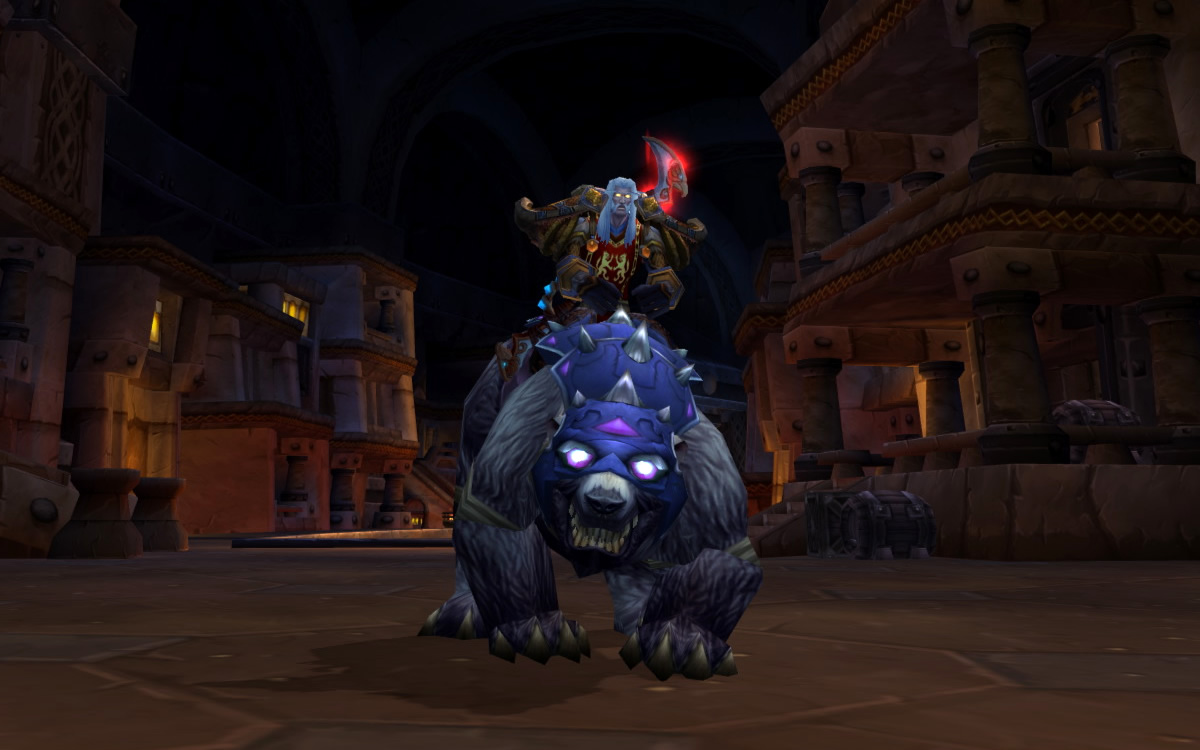 In fact, the only Horde city raid I’d ever participated in was at level 70 when we attacked Silvermoon and wiped with Theron at 2%. Since then, I’ve wanted this achievement, but for whatever reason was never able to find a group for it. When groups have been available I’ve either been busy raiding, running a dungeon, queueing for arena, or some other BS. I’ve always wanted the achievement for the sexy mount, but the stars just hadn’t aligned for me until last weekend.

Since I’d yet to down any horde bosses, it was fortunate I had the opportunity to join a fresh raid. We started on Lady Sylvanas, which was a lengthy fight, but we were met with little resistance so it went pretty smooth. We just entered through the sewer, hit her chamber and started nuking. A few Horde showed up, but not enough to slow us down.

Next we hit Silvermoon and put a whoopin’ on Theron. The place was a veritable ghost town, so this was cake.

Orgrimmar was a different story however. Word about our little horde leader killing spree had gotten ’round, so they were ready for us. We got Thrall down to about 40%, but in the end there were just too many horde circling the wagon. Our group had also gotten a little disorganized by this point, so we didn’t have the powerful and uniform assault that we needed. A third of the group was straggling behind for whatever reason, which lessened our impact and made the late-comers easy targets to pick off.

After our wipe we regrouped in Mulgore and planned our attack on Thunder Bluff. We were expecting some defenders, but nope… Cairne was an easy target. We stomped him hard, leaving only Thrall in the way of me and my achievement.

At this point some of the raid started to drop off, as many were thinking this effort was futile. We should have started with Orgrimmar, considering it’s the biggest challenge. Why we started with Undercity I do not know, but hey… I was just along for the fun and some additional pew pew.

We filled out the vacant raid slots, which was crucial because the level 74 Warrior in our group named “Hordeslaier” had to log soon. Good thing we didn’t lose him. 🙄

At any rate, with fingers crossed and a more unified front, we charged back into Orgrimmar and proceeded through to Thrall’s chamber. My primary job was to burn down the resistance as they entered through the corridor. Nothing like 2-3 shotting 80s while fully raid buffed. Good times.

Those of you that have downed Thrall know that you’d better pack a lunch before hand. He takes awhile to get down. 😉

In the end, I got my achievement and Wrynn sent me my mount. It would have been more memorable at 70, but hey… I’m happy. 🙂