I’ve specced Survival for PvP in the past, but never for very long. However, once BM was laid to rest last week, I decided to jump ship and become an explosives expert. Since there may be other displaced BM PvPers like myself, I figured I’d provide a glimpse at my spec, as well as share some of what little knowledge I possess concerning Survival Huntering in the realm of player versus player combat. 😉

Keep in mind that I’m not an elite PvPer. I’m decent and I’m competitive, but I am in no way an authority on hardcore Hunter PvP. I usually do pretty well in both BGs and arena, but I am always out looking for ways to step my game up. Although I’m feeling a lot smoother with it this go ’round, I’ve never remained Survival for more than a few weeks. If anyone has any advice or constructive criticism pertaining to this post, macro suggestions, tactics, and especially arena strategies, then please share. 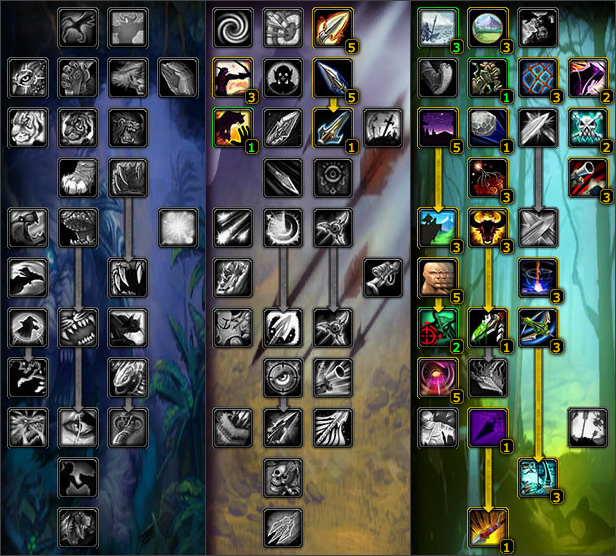 This is pretty close to about 90% of Survival PvP builds, give or take a few points.

The following is a brief explanation of which talents I grabbed and why. I even went all WoWHead on the tooltips for you guys. 🙂

No talents are chosen from the BM tree for my build. I could see where some Hunters may want to dip into Endurance Training for a little added insurance, but one hallmark of the Survival tree is added health and survivability. I’m sitting well over 26K health unbuffed, so I saw better use for these points elsewhere.

Mortal Shots, Lethal Shots, Careful Aim and Aimed Shot are mandatory. Mortal Shots and Lethal Shots are necessary for PvP burst, but most importantly, they get you down the tree to Aimed Shot. For those players new to PvP, know that you absolutely must have Aimed Shot if you plan entering battlegrounds or arena.

I dropped one point into Go for the Throat for a little added DPS, but that’s a matter of preference. I just like the extra 300 or so damage from the pet special that I get with every crit. 😀

Another talent worth mentioning in the Marksman tree is Focused Aim. I didn’t pick it up because I’m at nearly 6% hit via gear alone, but if you’re not at the PvP hit cap of 5% then you’re going to want to drop a point or two in here.

The added range from Hawk Eye is very important for PvP. We can be locked down pretty easily, so the further we can be pew-pewing away from our target(s), the better. Improved Tracking on the other hand, is not so important for PvP. The couple of extra points can make a bigger difference further down the tree.

I only throw one point into Entrapment because ice traps can be resisted quite often, therefore negating this talent. Also, I feel one point is a better value since you still get half the duration with only 1/3 of the points. Trap Mastery is great for added CC, as well as increased damage from traps and Black Arrow. Even if Survival Instincts only provided a 4% crit bonus to Explosive Shot it would be a must have, but it also gives you 4% damage reduction. Gotta max it.

5/5 Survivalist for the added hit points, but also because it’s a prerequisite for Hunter vs. Wild. Survival Hunters have 30% of their stamina converted to attack power. How solid is that..?!

1/1 Scatter Shot… mandatory. Although, it should be *cough* baseline. 😡

Survival Tactics provides a nice reduction to trap resistances, but I like it most for its 4 second reduction to the Disengage cooldown.

3/3 in Hunter vs. Wild for the incredible stamina to AP conversion for the Hunter and pet. 3 points here buys my pet and I nearly 600 attack power apiece. 😀

5/5 Lightning Reflexes for the 15% added agility.

3/3 Resourcefulness gets trap and Black Arrow cooldowns to 24 seconds, plus it increases mana efficiency. Also, when combined with the 4 pc PvP set bonus, it brings trap CDs down to 22 seconds! I say max it.

2/3 Expose Weakness is all I need to keep the buff active. With a 66% chance to proc, it’s likely it’ll refresh during the 7 second duration.

3/3 Thrill of the Hunt for mana efficiency.

When it comes to PvP, I’m not usually a huge fan of talents that have only a 10% proc rate, but Master Tactician is too good for me to pass up. With 5/5 in this talent, it boosts crit by 10% (equivalent to 459 crit rating) for 8 seconds. That’s huge. When combined with Survival Instincts and Glyph of Explosive Shot, this talent puts me well over a 50% crit rate for my Explosive Shot. That helps to cut through some of that pesky resilience. 😉

I go 3/3 in Hunting Party mainly for the guaranteed mana replenishment, but the 3% added agility is a nice bonus as well. 2/3 could probably get the job done here, but I like the 100% uptime myself.

Rather than go into why I didn’t pick up certain talents, I’ll just leave those answers for comments and questions you may have.

Glyph of Aimed Shot – This glyph is a must have for any PvP Hunter spec. The 2 second cooldown reduction helps us to maintain the uptime on the healing debuff. Don’t leave home without it.

Glyph of Disengage – Along with 2/2 in Survival tactics, this glyph will reduce the cooldown on Disengage to a mere 16 seconds.

Depending upon your play style and whether or not you like to arena, pet choices can be fairly subjective. However, I feel there are two pets that set themselves apart from all others as top choices. Those being crab and spider.

The reason I recommend these two pets is because they both possess valuable snare abilities. Both can lock down a target for 4 seconds, which is highly advantageous for battlegrounds, and invaluable for arena.

I go with a crab because I like what the tenacity tree has to offer. Crabs are sturdier mainly due to Blood of the Rhino, and possess some great PvP abilities such as Charge and Intervene.

However, spiders have some pretty cool abilities for PvP as well… First off, their snare can be cast from range, allowing the pet to lock down a target without getting into harmful melee range. They are extremely fast, which is fantastic for PvP. They also have a nice ability called Bullheaded, which acts like sort of a pet PvP trinket along with added damage reduction. Depending on how they’re specced, they can also dish out a little added damage over that of a Tenacity pet.

I’m going to advise against Ferocity pets because they’re just too squishy. Although their DPS is good, a dead Ferocity pet puts out a lot less damage than a live and attacking hardy ‘n’ tanky specced Tenacity pet would. Heart of the Phoenix is somewhat of an answer to the problem, but you have to sacrifice DPS in order to get it. Also, Ferocity doesn’t have Roar of Sacrifice, which is pretty necessary for PvP in my opinion. Overall, Cunning and Tenacity just offer a better arsenal of talents as far as level 80 PvP is concerned.

I haven’t tried a spider yet, but if I should choose to, here’s how I might talent him up… Garwulf’s Spider Spec

Obviously, hit rating is important until you reach the magical PvP hit cap of 5%. There are a few racials and talents that can increase misses above 5%, but I’d recommend against stacking hit in place of another stat once you reach 5%. 5% will get the job done for PvP.

If you plan on PvPing, then resilience is obviously a stat you’re going to need. I like to run with 800 or more, but I’d suggest a bare minimum of 600. If you arena, then I wouldn’t recommend going with anything below 700, since Hunters are nearly always the first focus fire target in any match.

As a Survival Hunter, the one stat you’re going to want to stack above all others is agility. This is due to the synergy it has with Lightning Reflexes and Expose Weakness. Attack power is good for Survival, but always itemize agility over attack power whenever possible.

Since Survival gains 30% attack power from stamina, piling on health is not a bad idea either. While I wouldn’t necessarily advise going all out with the stamina, choosing things like Frosthide Leg Armor over Icescale Leg Armor isn’t a bad call.

Intellect is always a good idea for the 1 to 1 attack power conversion from Careful Aim, in addition to the deeper mana pool.

Crit rating is a decent stat, but I’d put it behind attack power and definitely behind agility in order of importance. Armor Penetration is another stat that’s alright, but don’t go out of your way for it. Survival’s bread and butter is attack power based fire damage which is not affected by armor penetration.

Don’t worry about haste at all for PvP. Haste is a PvE stat, and not a very important one at that.

Last but not least, if you plan on doing some arena, then there is one other stat you need to seriously consider. This is spell penetration. You don’t need a ton, but 75 spell penetration is ideal. This can be obtained by a 35 spell pen cloak enchant and 2 20 spell pen gems, or by slotting 3 epic spell penetration gems. The reason for this is to burn through the 76 resistance provided by the Druid’s Gift of the Wild.

Druids are ever present in arena, and since SV thrives off of fire damage, it is important to be able to neutralize the Druid’s GotW.

I started to run out of steam, so rather than delay the post, I decided to break it apart. More on this subject very soon, including mechanics, strategy, macros and addons.

51 thoughts on “My Survival Guide to Surviving in PvP as a Survival Hunter: Part One”