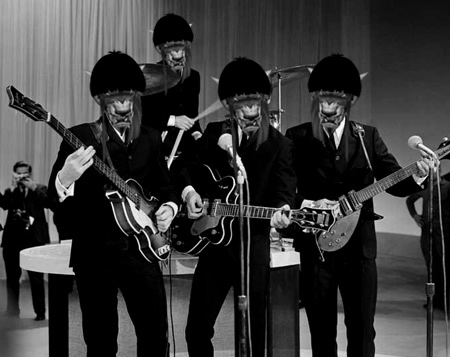 Within hours of the news being leaked on the internet, hundreds and even thousands of Hunters across Azeroth were scrambling to tame the new hottest thing… a Worgen..?!

By now this latest craze has become quite the rage, as now literally dozens upon dozens of them are popping up on servers everywhere. It’s caught the attention of the Blizzard developers who are now trying to determine how best to approach this situation. The Worgen was of course never intended to be tamed, but as with some of the other glorious flukes of the past, an incredibly clever or flat out lucky Hunter was able to discover a means of obtaining a Worgen as a pet.

Blizzard has made an official statement concerning the “Fate of the Worgen”:

As you put it Zennie, we are currently discussing this issue.

It is not intended that Garwal can be tamed while in worgen form and will be addressed via a hotfix in the near future. When we have determined how to handle situations where hunters have already tamed Garwal we will let you know.

I suspect that a fix will be implemented as early as today once the realms go live. The big question is… will they allow the Hunters who’ve already tamed this incredibly cool looking pet to keep it as is, or will they revert it to a wolf model? That’s the question of the hour.

There’s no doubt that Blizzard intends to fix it so that Garwal can’t be tamed in Worgen form any loger. After all, Hunters were never supposed to be able to keep an intelligent humanoid creature as a pet. That would basically make it a slave! Some Hunters pose the gorilla argument, but a Worgen and a gorilla are vastly different. As far as I know, gorillas in-game don’t speak or wear armor.

The question on everyone’s mind, especially for the fortunate Hunters who were able to tame him, is… are they going to allow the already tamed version of Garwal to remain as a Worgen? There are many good arguments for and against it.

In the past, Blizzard usually dealt with these types of things by allowing the ones that slipped through to remain. However, this situation is highly controversial due to the fact that Garwal is a humanoid, along with strong speculation that Worgen may be added as a playable race in a future expansion.

If I were to guess, I’d say that one day we’re going to log in and find a wolf where a Worgen used to be. I may be wrong on that, but one thing’s for sure… if that does happen, the Hunter community will be up in arms about it.

Only time will tell.