I’ll be the first to admit that my huntering skills could be a bit rusty due to my lack of gametime lately, but…like, holy s**t…I am actually a bit fatigued right now. My kiting muscles are taxed and I think I wore a hole through my mousing surface.

Taming Gumi on the PTR is easily the most difficult taming challenge I’ve ever experienced in the 7 years I’ve been playing a hunter. Those of you that solo-tamed King Krush back in WotLK…that was nothing compared to trying to wrangle this guy. Deth’tilac…pffft! Not even in the same league.

Gumi is a total badass.

Alright, so if you want to go after this brand spankin’ new spectral blue porcupine Spirit Beast, here’s what I have to offer…

A Guide to Taming Gumi – the Porcupine Spirit Beast

Gumi is one tough mother, as evidenced by the abundant corpses of fallen noobs near his spawn location. 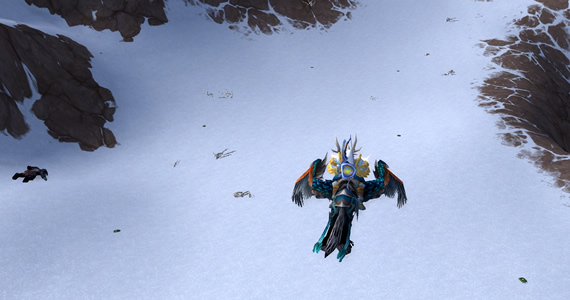 One does not simply walk up to Gumi and tame him…

He does not patrol, so he’s easy to find. He chills up on the mountain, northwest of One Keg. 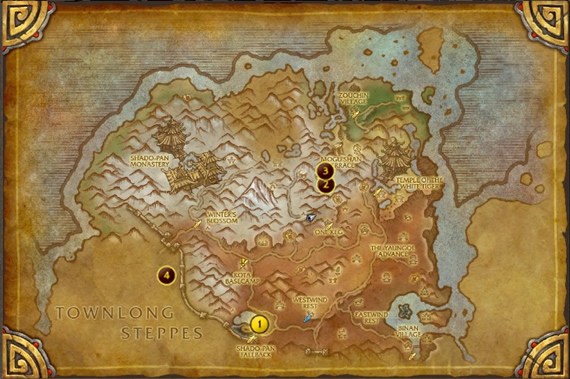 Gumi hangs out just NW of One Keg

Here’s what you need to know about him…

He is a neutral mob, like the rest of the Spirit Beasts (…apart from Karoma, who has a bad attitude).

You do not just simply go up to him and start taming. Like the rest of these new spirit porcupines, Gumi must be brought down to 20% health before he can be tamed — the same strategy that is used to get Deth’tilac. However, unlike the Deth’tilac taming challenge, there are no shortcuts with Gumi. You cannot sacrifice your pet to take off huge chunks of health — you must DPS him down.

He has just under 4M health.

He is extremely fast and if you let him get within melee range of you, he will smash your face in. He can one-shot you if he gets a crit. I know. I experienced this once.

He can be slowed, but he will juke your Frost Trap if you let him, so be advised. I found Concussive Shot and Glaive Toss to be the most reliable slows when kiting him, because he is a huge cheater. He will take shortcuts and exploit the terrain.

Preparing for the Tame

First of all, Gumi is a Spirit Beast, so you’ll need to be in your BM spec.

I didn’t bother redoing any of my talents, as I figured my standard BM PvP spec would do nicely, however, were I to attempt the tame again, I probably would make a couple of tweaks.

Here’s how I’d recommend you spec your hunter if you’re going to attempt a Gumi solo-tame.

I’ve updated this slightly since my first post. It was pointed out to me that AotIH in Tier 3 would be wasted due to having Cheetah up the whole time. I was a little drained and tired when I posted this. 😉 What I thought was going to be a quick 5-minute tame going into it, turned into a marathon 1hr20min kitefest. Exhilaration is a more useful option, because you might just need a clutch heal. Also, I’ve ignored Tier 2 since Gumi is immune to all roots it seems. 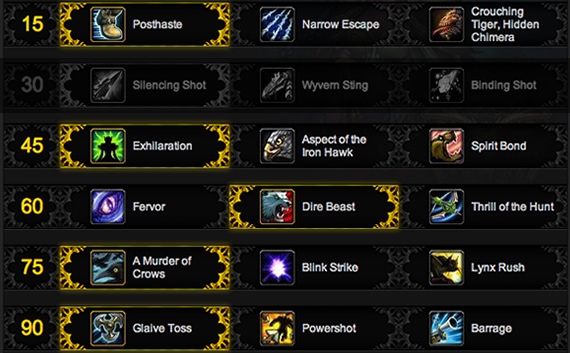 Don’t just come at him like you’re Wyatt Earp…do a little prep first.

There are only 2 glyphs that I feel are important here — Pathfinding and Tame Beast. Ice Trap could be useful for the added slowing radius, and Disengage might give you a little additional breathing room, but that’s up to you.

You’ll definitely want the added speed boost from Pathfinding, as you’ll be kiting Gumi while in Aspect of the Cheetah. You’ll absolutely need the shorter cast time on Tame Beast.

Put on your work clothes, because you’re going to want to be clad in pure DPS gear. Unfortunately for me, I’m pretty lacking in that department, so I did this in my PvP gear (apart from a Dragonling trinket). You can do the tame either way – but more damage equals less time kiting – which equals less room for error. 😉

Don’t worry about stacking stamina, because, like honey badger, Gumi doesn’t care…he’ll drop you at 400K just the same as he’ll drop you at 350K. I was able to absorb a hit and keep going on a couple of my attempts, but if he gets a crit, it’s lights out. Just plan on not letting him hit you. 😉

Alright, so you’ve reworked your talents, swapped out a couple glyphs and put on your big boy pants. All that means is that you’re able to attempt the tame. The key in adding this bruiser to your stable is the strategy you employ when taming him. Now it’s time to get to work.

Now, I’m not saying this is the best way to go about it, but this is what worked for me…

Before I began my kitefest, I dismissed my pet. Having a pet out during the kiting process is a huge liability. Regardless of what sort of utility you think it might bring, you don’t want to have to fuss with reviving it and/or dismissing it during the kiting process. Not to mention, you really can’t use it to DPS, because Gumi will just eat it once it’s close enough to him.

I made sure I was in Aspect of the Cheetah. Be sure to put this on your checklist, because even though it’s a no-brainer, you’d be surprised how easy it is to forget this important step after you’ve failed a few times and start overthinking things. 😉 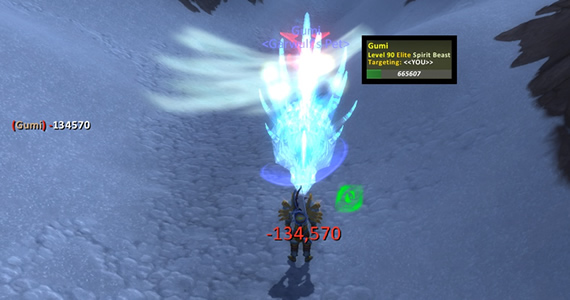 A little too close for comfort, but I got him!

I attempted this tame about 10 times before I nailed it. It is not a cakewalk.

A few of my fails were due to careless mistakes, like: not being properly glyphed, getting too far from him – causing him to reset, and forgetting to start out in Aspect of the Cheetah, however, I’d say at least a half-dozen of my fails were just due to minor mistakes. If you blow it at all during the tame, he will exploit your error and wreck you.

Some key pieces of advice…

If I recall some piece of info I forgot to mention, I’ll be sure to update this post. If I ever get my act together enough to do some video, then I think this would be an awesome tame to feature. 🙂

Good luck to those of you hoping to add this guy to your stable in Patch 5.2!

If you have any questions or comments, please post them below…